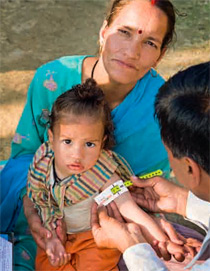 At the end of an autism workshop in India, a mother sitting with her unmarried daughter and her son with autism asked a question: How could she betroth her 20-year-old daughter if potential suitors thought autism was genetic?

The mother requested that Action For Autism, the nongovernmental advocacy group running the discussion, stop talking about autism’s genetic components.

This story, described in a paper published 3 January in the Journal of Autism and Developmental Disorders, illustrates the kinds of concerns that may arise when studying autism in resource-poor countries such as India.

In these countries, autism research is a burgeoning but nascent field compared with research in wealthier nations. The paper highlights how important it is to educate researchers and study participants about issues such as patient confidentiality.

As the number of autism studies worldwide increases, some scientists have concerns that research in low- and middle-income countries such as Nepal, Pakistan and Egypt needs more ethical safeguards.

The authors of the new paper note that institutions in these countries often lack institutional review boards (IRBs) — committees that approve the ethics of clinical studies. These committees are a standard fixture at most American and European universities.

Some countries, including India, have established councils and guidelines governing ethical research, but more work is needed. A 2003 Lancet article found that more than 50 percent of India’s biomedical organizations did not have an IRB, and those that did needed more thorough review methods.

The authors recommend several ethical precautions researchers can take to educate participants and ease their anxieties. For instance,getting the participants’ informed consent helps them understand the aims, risks and benefits associated with the study.

Ethical issues aren’t the only challenges faced by autism researchers in resource-poor nations. Many of these countries are just beginning to assess the prevalence of autism, for example. The screening tools used to detect autism are not always accurate across cultural lines. Scientists are beginning to evaluate these tools in non-Western populations.

Collaborating with scientists in wealthier countries may also benefit researchers in areas with fewer resources. But giving a cautionary example, the authors advise scientists to be careful not to bully or act condescendingly toward their colleagues in lower-income nations.

Often, when Indian families learn that autism can have genetic factors, they assume two things — that it must be curable because it is genetic, and that there might be a problem with the mother. Educating participants about the goals of each study and telling them about the limitations of their knowledge about autism could help amend these beliefs.