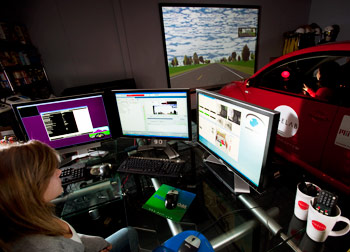 Every morning, drivers on their way to work merge with traffic, wave at one another and cut off other cars, creating complex social situations that some people with autism find hard to read.

It’s unclear how the sensory or attention deficits that often accompany autism affect driving ability. A small study, published 22 January in the Journal of Autism and Developmental Disorders, suggests that young men with autism look at different parts of the road than controls do.

People with autism who want to learn how to drive can register for driver’s education programs or take lessons from certified driving rehabilitation specialists, who are trained to help drivers with disabilities.

Still, more than 80 percent of people with autism rely on others to drive them around, according to a 2009 survey of 1,077 New Jersey individuals with autism, their parents and their caregivers.

Researchers at the Massachusetts Institute of Technology used a driving simulator to test ten young men with autism and ten controls, all of whom have driver’s licenses.

The simulator, a 2001 Volkswagen Beetle situated in front of a screen featuring a virtual roadway, includes software that responds with the types of sights and sounds that drivers typically experience when using a car’s steering wheel, brake and accelerator.

The researchers found that drivers with autism tend to gaze upward, away from the dashboard and oncoming traffic. Overall, the men with autism had a gaze 44 percent higher than that of the control group. That is of concern, because an upward gaze may delay an individual’s reaction to a situation in front of him.

After taking a ten-minute practice drive to familiarize themselves with the simulation, the participants drove on a virtual rural highway and in a busy urban environment for a total of 43 miles.

On the virtual highway, the drivers had to make a hands-free phone call to schedule a doctor’s appointment. Then, as they drove through the city, they performed an auditory task, listening to a speaker read a series of letters and saying, “Check,” whenever they heard a specific pattern.

To mimic the real world, the researchers told the participants they could earn $20, but would lose money if they had a collision, got a traffic ticket or took too long to finish the course. (At the end of the study, every participant received $20 even if he drove poorly.)

Two controls and two men with autism virtually crashed the car during the test. But overall, the two groups drove at the same speeds and stayed in their lanes while driving.

To assess the participants’ anxiety while they drove, the researchers also analyzed their heart rates, gaze and skin conductance, a measure of emotional response and attention.

The control group became nervous during the test, meaning their hearts beat faster as they performed the driving tasks. The autism group had higher heart rates before, during and after the experiment than the controls did.

These findings support previous studies showing that individuals with autism feel anxious about driving in general, and may in part explain why few people with autism drive.

As cognitive demands increased during the phone call and auditory tasks, the men with autism tended to look more toward the left, away from the car ahead of them and toward either oncoming traffic or the highway median. The researchers suggest that looking higher or away helps drivers with autism manage their anxiety.

The researchers found no differences in skin conductance between the groups, but a larger sample size may yield different results, they say.