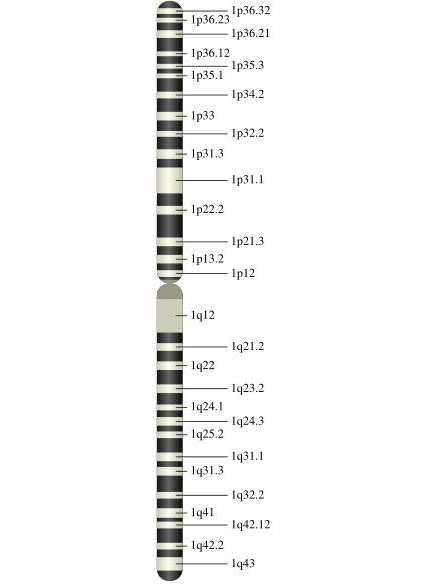 Deletions and duplications of DNA at a hotspot on chromosome 1 are associated with a wide range of developmental abnormalities including autism, mental retardation, heart problems and cataracts, scientists are reporting today.

If it seems bizarre that one region should be associated with so many disorders, it shouldnʼt be: deletions and duplications in a region of chromosome 16 and in this same region on chromosome 1 have already been linked to autism and schizophrenia.

In this study, published today in the New England Journal of Medicine, scientists screened 5218 people with unexplained mental retardation, autism or other congenital defects. Using a technique called comparative genomic hybridization ― which lets them detect differences in copy number between two genomes ― they found that 25 unrelated people have overlapping deletions in the chromosomal region of 1q21.1.

In 7 of these 21, the deletions had arisen de novo ― meaning that they are not present in unaffected parents. The deletion, which is about 1.35 Mb in size, includes at least seven genes.

The multinational team of researchers also found duplications in the same region in eight people; four of the eight have autism or autistic behaviors.

There are many things that make this finding credible: the researchers found these variations in several unrelated people; they verified the deletions in an independent sample of 788 people; and finally, they didnʼt find the deletions in 4737 controls (two controls had the duplication).

What I found interesting is that people with these variations may have subtle disorders that have gone undiagnosed. In this study, for example, the researchers found that one apparently unaffected carrier in fact has mild cataracts and a heart defect. I imagine the same might be true of people with milder forms of autism spectrum disorders.

At the same time, whatʼs also clear given the wide variety of outcomes is that any notion of genetic testing for autism or other diseases has to be handled carefully. As the authors note in the discussion, “Although the likelihood of an abnormal outcome is high in a person with a 1q21.1 rearrangement, current knowledge does not allow us to predict which abnormalities will occur in any given person.”