Children with autism heed fairness, but put themselves first 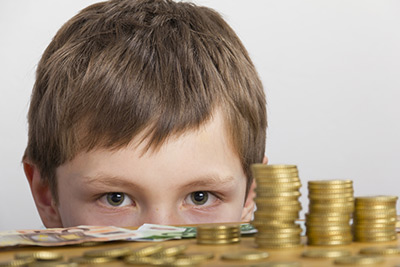 Whether they are distributing candy or money during playtime, children typically divide their resources equally among their peers by the time they reach 8 years of age.

This trend may not apply to children with autism, suggests a study published 12 February in Autism.

In a game that asks participants to divide money between themselves and a peer, children with autism tend to give themselves more funds if it doesn’t harm the other player.

The study suggests that they understand the basic idea of fairness. But in nuanced scenarios, they tend to put their own interests first as long as it doesn’t hurt anyone else.

In the study, researchers recruited children from 9 to 15 years of age, old enough to understand and practice fairness. The children — 57 with autism and 69 controls — played a computer game that tested whether they make fair choices. Each child won a euro for his or her participation at the end of the game.

For 16 rounds, children chose between one of two ways to divide a pile of money between themselves and another player. They were told that their decisions mattered because at the end of the game they and their opponents would both receive some of the money they had collected.

In each round, the children could always choose to divide the two coins equally by giving one coin to themselves and another to their opponent.

Their second option rotated among four possibilities. In two of these, they could keep either one or two coins for themselves and give nothing to the other player, outcomes the researchers termed “explicit harm.”

In the third scenario, the children could keep two coins for themselves and give one to their opponent. In this case, the split was unequal, but the other player was not harmed because he or she still received some money.

In the fourth option, the children could keep one coin for themselves and give two coins to the other player.

Both groups of children were more likely to divide the coins equally rather than cause ‘explicit harm’ to the other players by giving them nothing, the study found.

The results are in line with other research indicating that children with autism can distinguish between degrees of good and bad behavior. They can judge that hurting a person is worse than damaging property, for instance.

However, the groups responded differently during the unequal three-coin split: The children with autism were more likely to choose an unequal divide, giving themselves two coins and their opponent one.

Differences in motivation may explain this outcome. Children with autism may value tangible rewards such as money more than maintaining amicable social relationships, including the one with their virtual opponent, the researchers say.