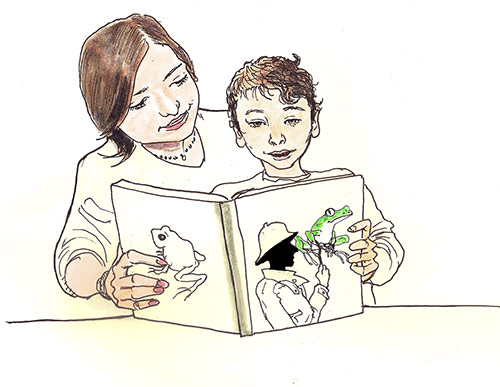 Autism is often considered a lifelong disorder, but a select group of children appear to shed their diagnosis as they grow up. In many ways, children who have achieved these ‘optimal outcomes’ act just like their typical peers do. A closer examination, however, reveals that they retain some features of autism, including verbal and physical tics and mild social deficits.

They also tend to use unusual phrases when narrating stories and correct themselves mid-sentence, according to a small study published 6 February in the Journal of Autism and Developmental Disorders.

In the study, researchers invited children aged 9 to 15 years to tell a story based on pictures in a book. They compared 15 children who had outgrown an autism diagnosis, 15 with high-functioning autism who had intelligence quotients above 77 and 15 controls.

Children in both autism groups were more likely than the controls to correct themselves while speaking — for example saying, “They were all … those crows were all sitting on the wires.”

These interruptions may be a sign of impulsiveness or of lingering language problems. That is, the children may make hasty errors but are socially aware enough to realize that they are not being clear and so correct their mistakes, the researchers say.

The children with optimal outcomes are 9 times more likely, and the autism group 21 times more likely, to use peculiar language than the control group. For example, they use odd phrases such as “human resistance team” to refer to detectives, formal language such as “excited by this new phenomenon” and scripted speech such as “stay tuned for the sequel!”

Seven of the children in the optimal outcome group used this sort of peculiar language compared with ten in the autism group and two controls.

The researchers suggest that children in the optimal outcome group sometimes use unusual phrases to get a laugh from their peers or to seem creative and quirky rather than odd. Because it’s unclear whether their language use impairs their social interactions, the researchers hesitate to describe them as deficits.

In contrast, the children diagnosed with autism show a number of language problems that go beyond quirks. For example, they digress into unrelated or personal topics when telling a story and are significantly more likely to leave their characters unnamed than the controls are, calling them “the man” or “the human.” They also often repeat themselves and use ambiguous pronouns, making it difficult for listeners to follow the story.