Changes to Canada autism program could do more harm than good 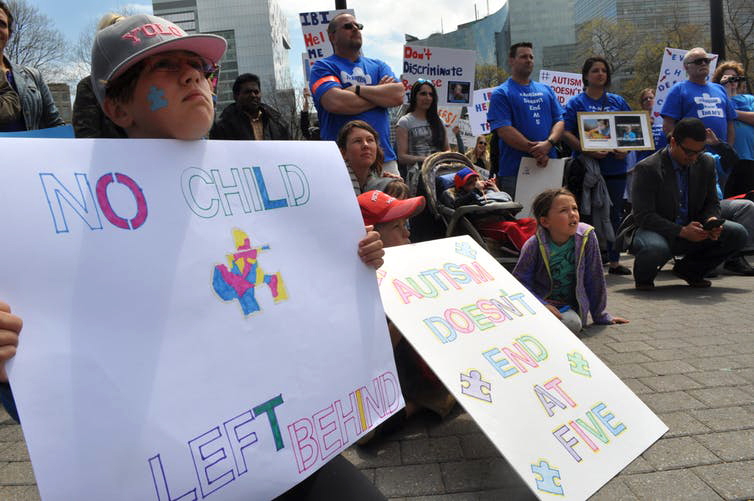 Fighting back: Families protested at the Ontario legislature in 2016 after the government announced that autism therapy would only be available to children under age 5.

The government of Doug Ford, premier of Ontario, Canada, recently announced its intentions to overhaul the Ontario Autism Program, something the province’s minister of children, community and social services has described as a “broken … Liberal mess” that the Conservatives inherited.

My son, Sebastian, has been part of this program. For our family, it has been anything but broken.

Sebastian entered the program just before he turned 5. He had waited nearly three years to enter, but it was well worth the wait.

At that point, he was completely nonverbal and unable to communicate even basic thoughts, still in diapers and willing to eat only three specific foods. He was anemic and malnourished and often frustrated, and we were at our wits’ end.

Like many families, we had been paying for a suboptimal amount of therapy out of pocket and went deeper into debt until our number on the waiting list for the program came up.

After receiving intensive therapy for three years, Sebastian now communicates a range of needs with his iPad communication system, he’s toilet-trained and he’s eating a diverse and nutritious diet of more than 100 foods. He is happy and healthy.

Each month, our interdisciplinary therapy team, which has included a psychologist, occupational therapist and speech and language pathologist, as well as music, behavior and feeding specialists, works to identify new needs and areas of development. He’s currently focusing on expanding his communication vocabulary and learning street safety, how to play with peers and to brush his teeth.

The cost of this therapy is more than 60,000 Canadian dollars (about $45,000) a year, but each year, as Sebastian’s independence and skills improve, he attends school for longer days and requires less therapy at home.

This intense investment into early development for children with autism may seem like a lot but ultimately will save many more taxpayer dollars in health care, social services and long-term supports over the course of the children’s lives.

Receiving therapy at the clinically recommended amount, as had been standard in the Ontario Autism Program, benefits not only children but also the reported health and well-being of their parents.

In a recent study of nearly 700 Ontario families who have children with autism, conducted over the past year with my colleague Margaret Schneider, we learned that Ontario autism families often modify their work hours to manage the demands and expenses of autism.

On average, parents reported that they spend 24 hours per week advocating and facilitating services for their children.

The announced program changes by Doug Ford’s government could hurt far more than help such families.

The initiative will grant children with autism under the age of 6 up to CA$20,000 a year to purchase supports if their parents are low income, and less or none if their income is higher. Children aged 6 and older will receive a much lower amount, up to CA$5,000 a year, until their 18th birthday.

This amount would purchase about one month of the intensive therapy many children need. If a child receives a later diagnosis, they will never benefit from the higher level of service. And parents who work extra jobs to pay for additional therapy will actually be penalized for doing so by qualifying for less government support.

The program changes were aimed at reducing the waiting list so that younger children could get into the program faster. That’s a laudable goal, but to achieve it, the government has pursued a harmful strategy that confuses the notion of equality — where everyone gets the same amount regardless of situation — with equity, where everyone gets the amount they actually need.

Giving families a lump sum of cash based on age and income ignores the most pressing criteria that should determine funding — the child’s actual needs.

Autism is a spectrum, ranging from features so mild that children achieve similar outcomes as their peers with minimal supports, to so severe that they require one-on-one support around the clock.

It’s like assigning a standard amount of physiotherapy to every person with back injuries, whether they actually require back surgery or whether they could just benefit from stretching exercises. It makes no sense, and it undermines the needs of children who most deeply require intensive services.

Further, assuming that children who are older than 5 suddenly require much less support is the same flawed logic that led to the previous Liberal government’s policy reversal and the birth of the Ontario Autism Program in the first place.

In 2016, when the Liberal government announced that autism therapy would only be available to children under the age of 5, firestorms of protests erupted.

At that time, the opposition Progressive Conservative Party and New Democratic Party were united in their harsh criticism of the age-cutoff policy. The campaign #AutismDoesntEndAt5 received overwhelming support across Ontario. The program was revised and overhauled, integrating a broad range of input.

Not once, but twice, former provincial governments have tried to impose age restrictions on autism therapy, and both times, under enormous pressure from parents-turned-protesters, led by advocacy groups such as the Ontario Autism Coalition, they relented and reversed their decisions.

Parents are now even better mobilized and appear committed to fighting this decision tooth and nail. One government official already quit over his disagreement with the policy.

Advocates are urging the government to slow down, consult more widely and allow autism parents the chance to focus on their children rather than return to the Ontario legislature to become full-time protesters.

The stress of constantly having to fight for adequate services and the uncertainty of sudden changes are major issues that parents raised in our research. With little transition period, parents and educators are scrambling to consider how to absorb thousands of high-needs students, about to be dropped from their current therapy schedules, into full-day schooling.

We all agree that shortening waitlists and receiving early supports is crucial. Yet this can be accomplished by other means, such as increased funding, finding efficiencies and providing more effective supports in schools to decrease pressure on the Ontario Autism Program’s budget.

I feel deeply for the thousands of families of children who will never have a chance to receive the level of support that allowed Sebastian to make such life-changing gains. My only hope lies in the power of parent engagement, and, as history has shown, that hope may not be misplaced.