Can we crowdsource autism research? 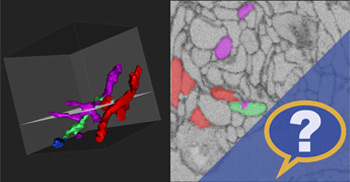 Sebastian Seung wants you to solve one of neuroscience’s biggest challenges by goofing off. More specifically, the Massachusetts Institute of Technology neuroscientist hopes you and thousands, maybe millions, of others will help map the connections of the brain by playing EyeWire, a new online community game he officially launched last week.

EyeWire is the latest in a string scientific research projects couched as games that leverage the scaling power of the Web, including Foldit (which makes a game out of protein structure prediction) and Phylo (a nucleotide-arranging puzzle designed to identify evolutionary relationships among DNA sequences).

According to Seung, this approach could help reveal the faulty wiring involved in neurodevelopmental disorders such as autism and schizophrenia.

But not everyone agrees, as highlighted by the spirited Seung–Movshon debate held 2 April at Columbia University in New York City.

Playing EyeWire for the first time, a few things become immediately clear: It’s tricky, addictive and beautiful. Scanning the 3D renderings while flipping through the microscopy slices is a thrill.

I was struck by the notion that an untold number of strangers out in the world were simultaneously killing time with this quirky game — and that we were all somehow contributing to science. (You can try the game yourself at EyeWire.org.)

EyeWire is just one example of how to capitalize on people power for research.

What do you think? Share your thoughts in the comments section below.

Not yet a member? Learn how to register here.