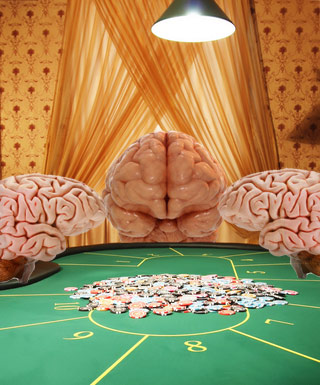 Even the most straight-faced poker player would have a hard time bluffing a brain scanner.

That’s just what participants in a recent Duke University study had to do, as researchers tried to find out how the brain behaves when we decide to fool someone. The researchers discovered that activity in an area of the brain called the temporal-parietal junction (TPJ) can predict when a player will bluff, but only when that person is playing with another individual as opposed to a computer. The research was published 6 July in Science.

The TPJ is thought to be involved in either social cognition — the ability to understand social interactions — or attention.

“These two alternatives have been heavily debated, but our findings provide evidence that the TPJ is instead carrying out a combination of both,” says McKell Carter, a postdoctoral fellow in Scott Huettel’s lab at Duke University in Durham, North Carolina, who did the work. Carter adds that the TPJ is anatomically positioned at the intersection of two information streams in the brain, one that processes attention and a second that identifies people and their movements.

Given that social deficits are central to autism, this is a promising approach for studying social function in people with the disorder, Carter says.

For example, a highly active TPJ during social interactions might indicate that the brain is receiving social signals but having difficulty sorting through them, Carter suggests. “Minimal TPJ engagement would support the idea that social [interactions] are simply considered irrelevant.”

One theory for the social deficits in autism holds that people with the disorder simply get less pleasure from social interactions. For example, brain imaging research has shown that children with autism have a lower reward response to pictures of faces than controls do.

In the new study, researchers put novice poker players into a magnetic resonance imaging scanner and asked them to play a simplified poker game against either a person or a computer. (Players were shown pictures of their human or inanimate opponent before the game.)

When the player was dealt a weak hand, he or she had to decide whether to bluff. Players bluffed, on average, 54 percent of the time. Researchers scanned a number of brain regions during the game and found that activity in the TPJ correlates with bluffing when playing with people, but not with a computer.

The findings support the idea that people tend to make different decisions when interacting with other people rather than with a computer, and implicate a region of the brain in mediating this difference.

“The TPJ seems to be engaged only when a player finds their opponent interesting,” says Carter.

The poker paradigm could be added to the growing arsenal of tools — including the use of brain imaging in conjunction with social games — for studying how people with autism make social decisions.