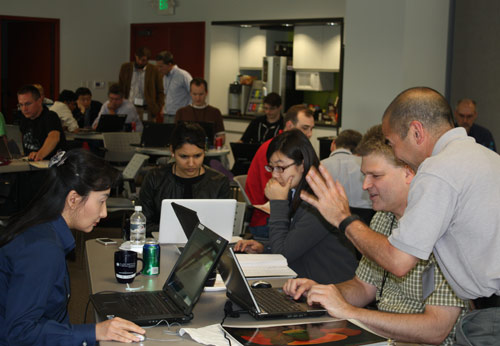 Last week, 30 researchers and programmers from universities, start-ups and tech companies converged on the nonprofit Allen Institute for Brain Science in Seattle for a five-day ‘hackathon.’ The goal was to create new tools that take advantage of the petabytes of brain mapping data residing in the institute’s massive databases.

The Allen Institute is home to multiple large-scale brain mapping projects, including the Allen Mouse Brain Atlas and the Allen Human Brain Atlas, both of which map gene expression across the brain. Part of the organization’s mandate is to make data, tools and other resources available to outside researchers, primarily on its website.

As in any large storehouse, hidden gems are lurking within the Allen databases, just waiting to be uncovered. To speed up the discovery process, the institute released a newly enhanced application programming interface (known in programmer-speak as an API). According to a release from the Allen Institute, a key goal was to ignite community momentum:

Catherine Ojo, a postdoctoral researcher in Mirjana Maletić-Savatić’s laboratory at Texas Children’s Hospital in Houston, created a program to download human gene data related to specific disorders, including autism. The program can help researchers discern the cellular structures where those genes are expressed and to map the metabolic, genetic and molecular pathways in which the genes are involved.

“[These pathways are] quite important for mapping gene studies to other types of studies,” says Ojo, whose own work focuses on analyzing data from magnetic resonance spectroscopy (MRS), a brain imaging technique that non-invasively measures metabolites in the brain. “We have already started collecting and modeling MRS autism data.”

Rich Stoner, a postdoctoral researcher in Eric Courchesne’s lab at the University of California, San Diego, developed a special viewer to look at the Allen Institute’s images of connectivity in the mouse brain.

Stoner has also developed a program to reconstruct layers of postmortem brain tissue collected from people with autism. The tool is being used in collaboration with the Allen Institute to look for noticeable defects in cell shape, number and organization within these samples.

The hackathon follows an announcement in March of a ten-year, $300 million plan to catalog the structure and function of the mouse brain in greater detail than ever before.