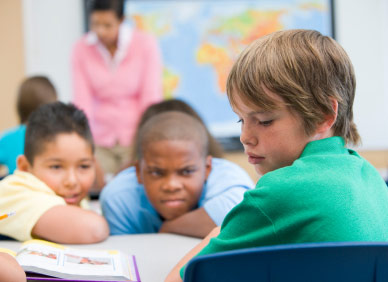 A new study from the Interactive Autism Network (IAN) shows just how powerful the combination of committed researchers and a motivated network of families can be.

IAN is an online project through which people with autism and their families can sign up to participate in research surveys that assess everything from vaccine use to wandering to parental depression. The effort has attracted more than 42,000 participants to date.

In the network’s latest study, researchers surveyed nearly 1,200 parents and discovered that children with autism are particularly vulnerable to bullying: nearly two-thirds of children with autism have been bullied, and they experience bullying three times more often than their typically developing siblings.

Connie Anderson, community scientific liaison of the IAN project, says in a Q&A on the IAN website that they ran the study because bullying was an issue of great concern to parents, yet little research had been done on it. Anderson says:

People were talking about this topic all the time and becoming increasingly upset and worried about the impact that bullying has on children with ASD [autism spectrum disorders].

We heard from many families about the impact of bullying and the terrible consequences — parents deciding to homeschool children, children suffering through bullying and becoming more withdrawn and anxious — the list goes on and on.

According to the study, bullying is worst between 5th and 8th grades, and children at public schools are picked on 50 percent more than those in private schools or in special education. Children with Asperger syndrome are the most vulnerable among the different autism spectrum disorder diagnoses, perhaps because these children often go to mainstream schools.

The researchers found that the biggest risk factors for bullying across the autism spectrum are clumsiness, poor hygiene, rigid rule-keeping, talking obsessively about a favorite topic, frequent meltdowns and inflexibility.

“These findings are important because those working with the children can prioritize improving behaviors we know make a child a target,” says Anderson in the Q&A.

It took IAN only a few months to collect the data and do a preliminary analysis. These early findings haven’t been published, but researchers are now looking at the data in more depth and aim to publish a number of reports in scientific journals.

One of the benefits of the IAN set-up is that researchers can delve deeper into specific issues by following up with families that volunteer to answer more questions. For example, Anderson says the group plans to examine why children with Asperger syndrome are most likely to be bullied.

Researchers also aim to conduct more longitudinal studies, which are also made easier by the IAN model. Specifically, they plan to measure the impact of bullying on children over time, “examining more of the cause and effect regarding mental health issues,” says Anderson. “Is it anxious children who are bullied, or do bullied children become anxious?”

“What policies work?” she asks. “What are differences between effective and ineffective interventions?”

Previous research, for example, has found that peer training can help improve social interactions of children with autism in the classroom more than training the child with autism can.

If that holds true, the results may end up benefiting many children on the playground, far beyond those who have autism.