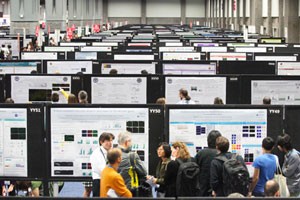 Last week, four SFARI.org reporters ventured to New Orleans to scour the 2012 Society for Neuroscience annual meeting for the most significant autism-related findings. Ignoring all temptations of jazz, bourbon and beignets, we produced 50 stories over the five-day conference. Our coverage ran the gamut from feral monkeys to the language of mice and new treatments for fragile X syndrome.

Outlined below is just a smattering of the autism-related news out of NOLA. Click here for our full conference coverage.

Myriad posters on mouse models of autism reflect the growing sophistication of these studies. For example, researchers showed that different mutations in the autism-linked SHANK3 gene lead to distinct glitches at the synapse, the junction between neurons.

Mice are also beginning to reveal the underpinnings of some clinical observations. For example, mice missing the autism-linked gene CNTNAP2 have broad defects in their oxytocin system. Giving the mice oxytocin, a hormone involved in social behavior that has been touted as a potential treatment for autism, alleviates social deficits in these mice.

Beyond genetics, researchers found that the sperm of old mice has a different profile of chemical modifications to the underlying DNA code than that of young mice. These mice can pass down the modifications to their pups. If this also happens in people, it may explain why older men are more likely to father children with autism than younger men are.

A new catalog of mouse cries may help researchers understand whether their vocalizations can be used as a surrogate for language and communication deficits in autism. In rats, too, scientists are beginning to parse the link to autism.

Researchers are also looking beyond rodents to songbirds and monkeys, particularly to understand higher-level cognitive processes that may relate to autism.

For example, by recording from the brains of monkeys as they watch videos of other monkeys, researchers have discovered certain cells in the amygdala — a brain area involved in fear and other emotions — that seem to respond specifically to eye contact.

An island colony of feral monkeys may help uncover how genetics contributes to complex social behaviors in fragile X syndrome. Researchers are building a family pedigree of the animals and cataloging aggression and other social behaviors.

And researchers in Japan are taking the first steps in creating transgenic monkey models of autism. They engineered an enzyme for inserting the mutation that causes tuberous sclerosis complex (TSC), an autism-related syndrome, into monkey embryonic stem cells.

There were also presentations on a variety of new resources in the field, such as the first data release from the Human Connectome Project. Algorithms and other data from the project may help improve brain imaging in autism. A second study, a large-scale analysis of postmortem tissue collected from people with autism, may help reveal new risk genes.

High-throughput screening tools, using either human stem cells from people with autism-related disorders or neurons from animal models, may aid in the search for new drugs.

On the brain-imaging front, researchers have developed better ways of analyzing social behavior in the scanner. Another study questions the meaning of so-called functional connectivity imaging, in which researchers look for synchrony in activity among brain regions as an individual lies quietly in the scanner. They suggest that not everyone does the same type of daydreaming when lying in the scanner, which may in turn influence connectivity patterns.

Overall, it was obvious to us that the autism field is maturing, asking and answering increasingly complex and nuanced questions. But don’t just take our word for it: Please tell us what you think were the most interesting nuggets to emerge from this meeting.