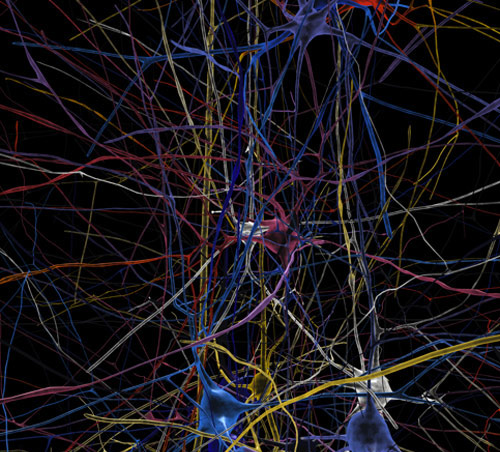 Mapping even a small portion of the 100 billion neurons in the human brain, and the trillions of synapses that connect them, is the brass ring of neuroscience.

Such a project is likely to be orders of magnitude more complex than sequencing the human genome, yet a growing number of neuroscientists are calling for large-scale efforts, along the lines of the Human Genome Project, to accomplish that goal.

The Human Connectome Project, for example, is a $30-million, multi-institute effort to use imaging technology to map neural connectivity in the human brain.

Two large-scale projects now under way are even more ambitious, aiming to integrate many types of information about the cortex into cohesive models.

The Allen Institute for Brain Science announced on Wednesday that it had received $300 million in funding from the institute’s founder, Paul Allen, to support three new initiatives to explore how neurons code information, develop into circuits and come together to create brain functions.

Researchers plan to begin with a detailed exploration of the anatomy and physiology of cells within the mouse visual cortex and its connections. They will ultimately use that and other data to build a dynamic model of the mouse cortex that can be used to test theories about how the cortex works.

The Human Brain Project (HBP) headed by Henry Markram, professor in the Neural Microcircuitry Laboratory at École Polytechnique Fédérale de Lausanne in Switzerland, takes a different tack, proposing to simulate the human brain by integrating data collected in different labs all over the world.

The effort grew out of the Blue Brain Project, which created a model of a single neuron by combining data from more than 20,000 experiments at a number of labs. Markram’s team later assembled these virtual cells into a model of a cortical column, a subunit of the cortex, and a network of 100 interconnected columns.

Last May, the HBP was selected as one of six finalists for a European Union (EU) grant of $1.3 billion (1 billion euros), part of the EU’s Future and Emerging Technologies initiative. The finalists, from which two winners will be announced, each get close to $2 million (about 1.5 million euros) to refine their projects over the next year.

Big projects like these often spark criticism over whether it’s wise to devote such large sums to a single effort. (The Human Genome Project was roundly attacked at its inception.)

In a commentary published today in Nature, Christof Koch, the Allen Institute’s new chief scientific officer, and R. Clay Reid, a Harvard professor who will join the institute this summer, anticipate this question:

Our response is that funding agencies are already spending billions of dollars on many smaller projects across all areas of biomedical research, and the Allen Institute wants to pioneer a new approach. We want to understand one piece of brain tissue by integrating knowledge across techniques and scales, rather than distributing the funds more widely.

… There is no guarantee that neuroscience is ready to become big science — but the only way to find out is to try.

As they suggest, it’s impossible to predict the outcome of either of these projects, but there is no doubt they will generate valuable tools and data for the larger research community. Like the Human Genome Project, both efforts emphasize plans to create a resource for scientists.

The Allen Institute’s mandate is to make data, tools and transgenic animals available to outside researchers, and its track record on this is solid: The Allen Brain Atlas is already in use across the globe.

Similarly, a large part of the effort in creating Blue Brain involved making it useful to the broader community, including a tool to conduct data simulations and a website that collates PubMed data on ion channels.

As noted in a recent feature in Nature:

If the HBP is selected, one of the key goals will be to make it highly collaborative and Internet-accessible, open to researchers from around the world, says Markram, adding that the project consortium already comprises some 150 principal investigators and 70 institutions in 22 countries. “It will be lots of Einsteins coming together to build a brain,” he says, each bringing his or her own ideas and expertise.