Babbling delay may be early marker of autism 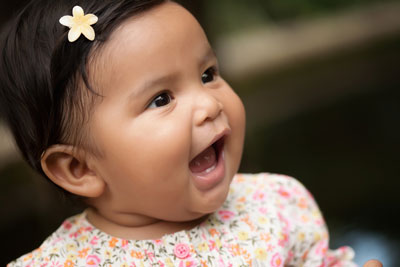 Babies later diagnosed with autism are slower to start babbling and do less of it once they get started than typical babies do, reports a study published 31 January in the Journal of Autism and Developmental Disorders. Because delays in babbling are rare, this could serve as an early marker of autism.

At around 9 months of age, infants start to repeat syllables that contain both a consonant and a vowel, such as ‘ba-ba-ba’ — the building blocks of words. So it’s no surprise that babies who take longer to babble often have language delays, a characteristic of autism.

In the new study, the researchers analyzed home videos of 23 babies later diagnosed with autism and 14 controls. The families submitted two five-minute videos of each child, one recorded at 9 to 12 months of age and the other at 15 to 18 months.

The researchers categorized babies as babbling if they made at least 15 consonant-vowel utterances, such as ‘ba,’ out of 100 speech-like sounds. They left other noises, such as grunts, sneezes, hiccups, crying and laughter, out of their analysis. They also excluded sounds from two outliers with autism because the infants babbled even more than the controls did.

Overall, infants later diagnosed with autism are quieter than the controls. And at 9 to 12 months of age, they produce an average of 4.5 syllables per minute, compared with 5.8.

Of the 21 infants later diagnosed with autism, 19 did not babble normally at 1 year. This suggests that the delay is a strong predictor of the disorder.

Even after the babies with autism did babble, they did so less than controls. On average, out of every 100 sounds, the autism group made 6 babbles compared with the controls’ 17 at age 9 to 12 months.

The children with autism lagged behind even at 15 to 18 months: They made 16 babbles per 100 sounds, compared with 28 in the control group.

It’s possible that the motor system supporting speech is delayed or disorganized in children with autism, making it more difficult for them to produce these sounds, the researchers say.

It may also be that they are less motivated by social interactions than typically developing babies are. This may in turn cause their parents to talk to them less, reinforcing this pattern. Research has suggested that babies in low-income families make fewer sounds than do those in more affluent families, presumably because the former hear far fewer words in their interactions with their families.