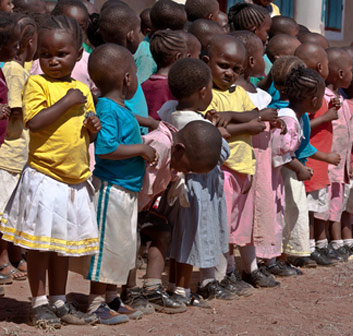 Mental illness is the leading cause of disability in the world, according to the World Health Organization. Even more troubling: Four out of five people with psychiatric disorders live in developing countries, where they have few opportunities for treatment.

That’s certainly the case for autism in Africa, though, like in other resource-poor areas of the world, awareness is beginning to improve. In the past few years, a handful of researchers in various African countries have investigated children with autism. A new review of these reports finds that these children tend to be diagnosed much later than their counterparts in the U.S., and are more likely to be nonverbal.

The review, published in the December issue of the South African Journal of Psychiatry, analyzes six studies: three from Nigeria, the most populous country in Africa, and one each from Tunisia, Tanzania and Kenya.

The studies, published between 1982 and 2010, each identified only a few dozen children with autism, from clinics thousands of miles apart. Yet the cases are strikingly similar. Nearly all of the children were diagnosed relatively late: many at around 8 years old and some into their teenage years. Two of the studies reported nonverbal rates among children with autism of 51 and 71 percent, respectively, compared with around 25 percent in the U.S.

There are many factors that could account for these numbers, not least of which is a weak medical infrastructure and lack of resources. For example, compared with the rest of the world, the prevalence of treatable disease — malaria, tuberculosis, HIV — is high, while the number of doctors and medical facilities is low. Cultural and educational factors may play a role, too.

The authors cite research showing that autism awareness is low not only in the general African population, but also in the medical community.

One survey asked Nigerian nurses who specialize in psychiatry or pediatrics about the causes of autism. Some 40 percent fingered preternatural or supernatural causes, such as ancestral spirits, enemies, sinning or the action of the devil.

These attitudes, the researchers suggest, mean that when a child has a mental or neurodevelopmental problem, help may first be sought from traditional healers or religious leaders, rather than from a medical clinic, which could account for the late diagnoses. These lost years may also contribute to the lack of language in many of the children with autism, perhaps because they did not have access to early interventions or speech therapy.

The good news is that mental health issues in Africa are starting to get more attention.

For example, in 2005, the World Health Organization launched the Mental Health and Poverty Project, which aims to bring psychiatric care to poor communities in Ghana, South Africa, Uganda and Zambia. And just last week, a large group of public health experts called on the United Nations General Assembly to host a special session on the issue of global mental health.