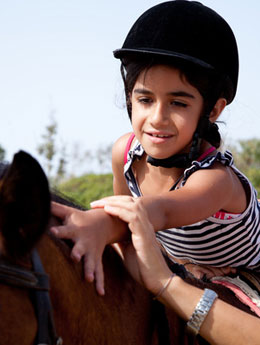 From dogs and horses to dolphins and even llamas: In the past five years or so, there’s been enormous interest in using animals to help children with autism.

Many parents say activities such as horseback riding can alleviate stress and help children with autism become more sociable and communicative. In one survey, nearly a quarter of parents reported that their children with autism had participated in some kind of animal therapy.

Animals have been shown to help people with other disorders that involve social withdrawal, such as Alzheimer’s disease and schizophrenia, so it stands to reason that they might benefit people with autism as well. And the idea that these creatures can draw children with autism out of their shells makes for a warm and fuzzy story.

But that’s also the problem: The whole topic is pretty fuzzy from a scientific perspective.

There’s little rigorous evidence about whether animal-assisted therapy can help people with autism, or which people with the disorder might benefit the most. A paper published 5 November in the Journal of Autism and Developmental Disorders provides the first comprehensive review of the topic.

Surveying the literature from 1989 to the present, the review finds just 14 studies that have tested the effectiveness of these therapies for autism. Most of the studies involved horseback riding or the use of service dogs in the homes of children with autism. School-based interventions with rabbits, guinea pigs and llamas featured in one study each.

Strikingly, although there are more than 100 programs worldwide enabling people with disabilities to swim with dolphins, not a single study has evaluated the effectiveness of the programs for those with autism.

On the whole, however, the review finds that animal therapies benefit children with autism. Of the 14 studies, 9 reported increased social interaction, 5 showed improved communication and language use, 3 found a decrease in the severity of autism symptoms as measured by standardized questionnaires, and 3 an alleviation of problem behaviors such as aggression.

The studies have a number of methodological problems, however, so the results are preliminary. The studies are also small: 9 of them include 12 or fewer participants. How long the participants used the therapy and how the researchers measured effectiveness is inconsistent, making it difficult to compare results across studies. Only four of the studies included a control group of children with autism who didn’t receive the therapy.

Many autism therapies are helpful for only a subset of children with the disorder, and in fact several of the studies found that not all participants benefit. Children with severe autism may even mistreat animals because they don’t understand the need to be gentle.

I hope researchers will take up this review’s call for rigorous studies of animal therapies in autism. If they help some children with the disorder, they would be a relatively low-cost, noninvasive approach to supplement other treatments. What could be better than a warm and fuzzy story, backed by solid science?