An ape with ‘autism’ 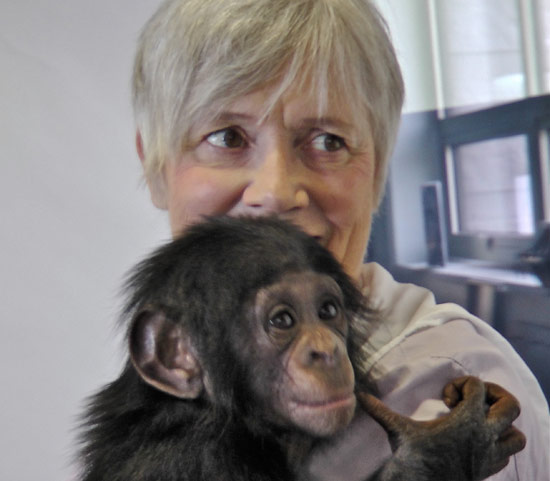 Uncommon ape: Teco, a young bonobo born in captivity, exhibits behaviors similar to those seen in people with autism.

Similarities between us and our closest ape relatives — chimpanzees and bonobos — have shaped our understanding of what it means to be human. The latest surprise is Teco, a young bonobo who shows behaviors that look suspiciously similar to those associated with autism.

Teco is the son of Kanzi, a 30-year-old bonobo whose use of symbols to communicate with humans made him famous. The two live with five other bonobos at the Great Ape Trust, a nonprofit research institute in Des Moines, Iowa, that is the site of a long-term study on ape language and culture.

Researchers at the institute noticed Teco was different almost as soon as he was born. Most ape infants reflexively cling to their mother’s fur, but Teco didn’t. He had to be supported and carried to keep him from falling, making it difficult for his first-time mother Elikya to care for her baby.

When Teco was 2 months old, Elikya handed the baby off to his aunt, as if asking for help. The aunt, Panbanisha, brought him to institute staff, who took on more of the responsibility for rearing Teco.

That’s when they began to notice that he also showed various autism-like symptoms: lack of eye contact, strict adherence to rituals or routines, repetitive behaviors, and an interest in objects rather than in social contact.

A blanket, for example, has to be arranged just so or else Teco becomes agitated, says scientific director William Fields. Teco also shows repetitive movements similar to those seen in some children with autism.

“He seemed to be fascinated by parts of objects, like wheels and other things, and he wasn’t developing joint attention,” Fields adds. “The baby was avoiding eye contact — it was like it was painful for him.”

In people, differences in eye movements and eye contact are early signs of autism. According to Fields, who has studied the apes for more than a decade, eye contact is even more important to social communication in bonobos than it is in humans.

This month, another group of researchers reported that bonobos have more developed neural circuitry than do chimpanzees in parts of the brain involved in emotion and empathy. These brain regions, such as the amygdala, the hypothalamus and the prefrontal cortex, are also areas that show differences in people with autism.

The work provides a kind of mirror image to Teco’s story: If the structure of the social brain is similar in humans and bonobos, perhaps it’s not so surprising that social abnormalities can look similar in the two species as well.

The team at the Great Ape Trust plans to undertake a genetic analysis of Teco and the other six bonobos in the colony. They have already begun sequencing Kanzi’s genome.

Differences in gene sequence or expression between Teco and the other bonobos could help explain Teco’s symptoms — and perhaps also lend insight into autism in people.

The researchers have also begun the bonobo equivalent of early intervention, encouraging Teco to use objects in a social way — to play ball with someone, for example, rather than just getting lost in examining the ball on his own.

They also try to catch and hold Teco’s gaze — even if it means getting down on the floor so that they can look up at him. Interestingly, one of the other bonobos, Nyota, uses the same strategy to engage with the little one.

These ploys have improved Teco’s eye contact and social behavior, although he still has other autism-like features.

“There are moments when he just seems so completely normal, and there are other times when it’s clear how different he is,” Fields says, sounding strikingly like a parent of a child with autism. “He’s charming and wonderful and we love him, but he is different.”