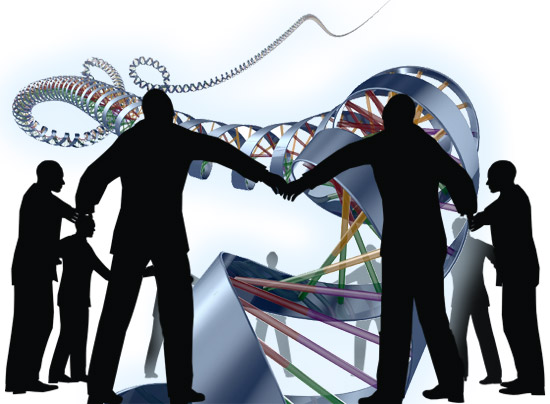 We are living through the era of the scientific consortium, and few fields seem to have escaped the trend toward large, collaborative projects. Autism research is no exception.

On 7 April, a group of investigators conducting autism genome sequencing projects met at the New York Academy of Medicine. The meeting, organized by SFARI investigator Joseph Buxbaum, aimed to establish the ground rules for a potential Autism Sequencing Consortium (ASC).

This being a small community, the list of attendees overlapped with participants at the SFARI-sponsored sequencing workshop held in December, but included others who carry out large-scale DNA sequencing projects in autism.

The impetus for the new meeting seems to have come largely from the National Institute of Mental Health (NIMH). Thomas Lehner, chief of genomics at the institute, outlined the substantial investment the institute made in 2009 for sequencing autism genomes.

The institute is pushing an autism consortium that would be accompanied by aggressive data sharing and exchange of ideas for best practice in sequencing and analysis. Lehner even dropped not-so-subtle hints that members of the consortium would be rewarded with additional funds to carry out meta-analyses of sequence data.

One idea that seems likely to move forward is the development of an autism-sequencing registry, so that the same individual’s sample is not sequenced over and over again by different investigators. This registry is likely to be accompanied by a list of sequencing projects that will make transparent the work plan for each sequencing group. In principle, early data sharing should enable investigators to generate statistically significant associations sooner than they otherwise would.

Finally, Matthew State, who is carrying out pilot whole-exome sequencing of 100 families from the Simons Simplex Collection, suggested that a key contribution of the proposed consortium could be to define ways to integrate sequence data from candidate gene, whole-exome and whole-genome efforts.

Most scientists in attendance seemed at least moderately enthusiastic about these ideas, but the overall point seemed elusive. As the meeting drew to a close, more than one participant expressed concerns about the goal. It took some gentle prodding by Buxbaum to identify volunteers to lead committees.

Perhaps this isn’t surprising, given that joining a consortium might mean having to share credit and giving up a monopoly on data. At the moment, the cost of sequencing is still high enough that an individual lab can’t expect to go it alone and make a discovery with high statistical confidence. But the costs are plummeting. If we want to make this consortium a reality, it will have to happen before this window closes.