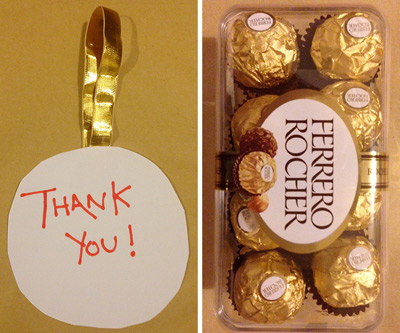 Surprise gift: Adults with autism struggle to distinguish between people showing feigned happiness after receiving an unattractive thank-you card and genuine happiness in response to a box of chocolates.

Most people’s outward reaction to disappointment is to hide it: They may put on a brave face after losing a game, perhaps, or give a polite smile when opening a bad gift. Adults with autism usually understand in theory when and why others may feign emotions, but they don’t recognize those expressions in real-life situations, reports a study published 4 December in Autism Research.

This inability to guess what triggered someone’s subtle expression can lead to social missteps — congratulating instead of consoling a disappointed friend, for example.

Studies using photographs of exaggerated expressions, such as surprise or sadness, suggest that people with autism have difficulty interpreting emotions. The new study instead tested for subtle cues that may be more indicative of real-life interactions.

In the study, 16 high-functioning adults with autism and 19 controls watched short film clips of university students’ faces as they received surprise gifts that were out of view of the camera. The participants then had to judge which gifts had produced the students’ expressions.

The clips showed spontaneous reactions to the presents — usually happiness for a box of chocolates, feigned happiness for an unattractive handmade card and confusion about whether a wad of Monopoly money was a stand-in for the real thing. The researchers also used an eye-tracker to determine whether eye contact helps people understand emotional cues.

Overall, the autism group made fewer correct guesses than the control group did.  They performed as well as controls in identifying confusion in those who had received Monopoly money, but struggled to distinguish between responses to the chocolate and the handmade card.

The adults with autism tended to mistake feigned happiness for real happiness, and incorrectly guessed that those who had received the handmade card had been given chocolate.

Interestingly, although decreased eye contact in autism is cited as a factor in poor emotional recognition, the autism group did not look less at the students’ eyes than the controls did. Other factors, such as the ability to pick up on body language or the tone of a person’s voice, may explain their difficulties in identifying subtle emotions, the researchers say.

Those with high intelligence quotients and fewer autism traits, such as repetitive behavior, did no better on the test than the other participants with autism, suggesting that these two factors are unrelated to interpreting others’ emotions.