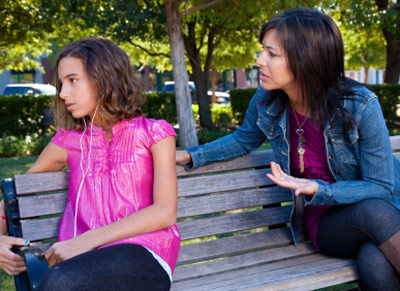 The title of the short-lived sitcom I Hate My Teenage Daughter says it all. Teenagers can intermittently morph into monsters, at least to the adults around them, as they struggle with social relationships and their newfound independence.

But teens with autism may avoid some of that anguish. According to a survey comparing adolescents with autism to those with diabetes and to typical controls, those with autism report better relationships with both parents and teachers, as well as a stronger self-image.

Researchers surveyed 26 adolescents with either Asperger syndrome or high-functioning autism, 44 adolescents with diabetes, and 250 controls of similar ages, using a questionnaire on quality of life called the VSP-A (named for the French ‘Vécu et Santé Perçue des Adolescents’). They chose adolescents with diabetes as a control group because this lifelong condition requires constant management, such as insulin injections, and might therefore affect social relationships as well.

In order to elucidate the effect of autism itself on quality of life, the study focused on children who have autism and normal intelligence, and excluded those with other disorders in addition to autism.

Participants also answered questions about social support, such as whether they had friends and played sports, and about how much relationships and other social factors mattered to them.

But despite the strengths in adult relationships, teens with autism do suffer in a number of ways. Overall, they had lower quality-of-life scores compared with the other two groups. The biggest hits came in relationships with friends, and emotional and sexual relationships, which is unsurprising given the nature of the disorder.

The results are in line with the findings from a longitudinal study published last year, showing that teens with autism, especially those with higher IQs, tend to withdraw socially.

According to the new study, ways to counter withdrawal could include regularly participating in a sport, having the support of a school counselor or other adult at school and having friends, all of which the surveys showed benefited quality of life.

The researchers behind the study focused more on the negative aspects of the survey, which are no doubt important, than on the positive. But it’s worth investigating why teens with autism reported having a stronger sense of self and better adult relationships than their peers.

It may simply be a matter of developmental delay, with these teens more closely resembling younger typically developing children. But perhaps there is something more.

Lack of self-confidence and strained relationships with the adults around them are two of the most difficult and ubiquitous aspects of being a teenager. If kids with autism could show us a way around some of that anguish, parents, teachers and even teens themselves would surely heave a sigh of relief.