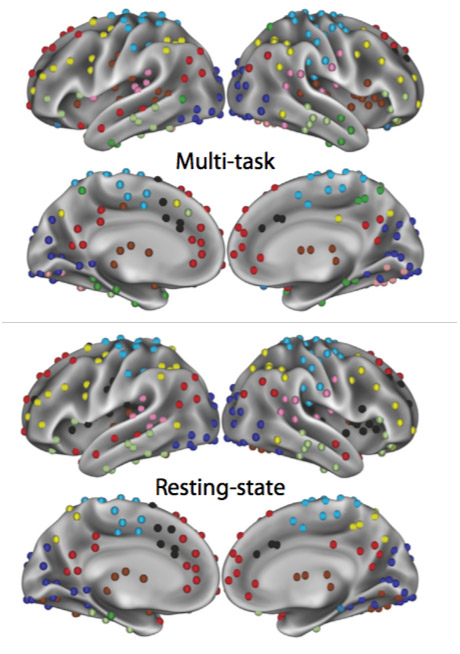 Timing is everything, even when it comes to brain activity. Individual neurons fire all the time, but it’s the synchronous firing of many cells in many regions that seems to drive cognitive skills, such as language, decision-making and even consciousness.

This so-called ‘functional connectivity’ reveals which brain regions are most harmonious — ramping up or down at the same time — implying that they’re part of the same functional network. It’s a hot topic in autism research, with some studies suggesting that brain regions in people with the disorder are out of sync with each other.

Researchers generally measure functional connectivity by scanning volunteers’ brains either while they’re resting passively or while they’re engaged in a specific task. According to some studies, these two approaches activate distinct networks, because the brain uses one mode of connections for active tasks and switches into another mode for quiet reflection.

A study published 2 July in Neuron questions this premise. It argues that these two networks are more similar than previously thought.

This has major practical implications for autism researchers because it means a resting brain may be just as informative as an active one — but far simpler to track.

The new study analyzed two previously published sets of functional magnetic resonance imaging data. The first included brain scans of 15 people while they performed 64 tasks, such as logic questions or sensory and motor tasks. The second dataset included 118 people from the Human Connectome Project, and tracked brain activity during seven tasks and rest sessions between the tasks.

The researchers used clustering algorithms to uncover synchronies among hundreds of brain regions during specific tasks, any task, or at rest.

Certain tasks activated subtly different networks than did other tasks, the study found. But when the researchers compared brain activity from all tasks at once, they detected a common activation pattern underlying all of them. This same basic pattern cropped up when the participants’ brains were at rest.

These findings are sure to be welcome news for many autism researchers. Scanning anyone’s brain while performing a task is difficult, but that’s particularly true when looking at children with autism. Participants have to learn the task and sit still in the scanner for nearly an hour while performing the task — if they don’t, their head movements can introduce artifacts in the data. By contrast, scanning brains at rest takes only a few minutes and doesn’t require any training.

That means studies of the resting brain can help determine whether the brains of people with autism keep a different time.