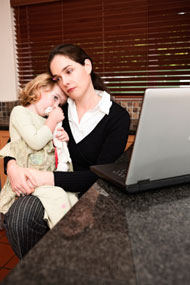 A whole host of factors have been linked to an increased risk of autism, including flu during pregnancy, low birth weight and a family history of mental illness. A new study suggests that childhood abuse in women raises autism risk in their children.

Researchers analyzed data from 54,963 women participating in the Nurses’ Health Study II, including a subset of 549 women who reported having a child with autism.

The study, launched in 1989, was designed to measure the long-term effects of oral contraceptives, diet and lifestyle risk factors on women’s health.

According to a survey on childhood abuse given to a subset of the women, women who undergo high rates of physical and emotional abuse as children are more likely to go on to have a child with autism.

The researchers found that of the women who had suffered the most extensive abuse, 1.1 percent have a child with autism, compared with 0.7 percent of women who reported no abuse.

Childhood abuse is also associated with an increased risk of a number of other problems, particularly during pregnancy, such as gestational diabetes, smoking, alcohol use, shorter pregnancies and lower-birth-weight babies.

Some of these factors have independently been linked to autism. However, the researchers say these factors account for only a small portion of the increased risk reported in the study.

The new study is among the first to look at autism risk and stress during the mother’s childhood, a question that can only be asked in large, long-term studies such as this one. However, several studies have looked at the influence of maternal stress, particularly during pregnancy, on autism risk.

The reasons for the link aren’t clear. Child abuse has been linked to parents’ mental illness, and it’s possible that these families carry genetic risk factors that boost risk of both mental illness and autism.

Perhaps the most intriguing possibility lies in epigenetics, chemical modifications that control when genes are expressed and which can be passed down to children. A growing body of research suggests that stress in childhood can exert long-lasting influences, even in the following generations, and epigenetics has been fingered as the explanation.

Whatever the cause, the researchers say the findings suggest that studies of maternal risk factors and autism should include childhood abuse — and that women who have experienced abuse should make sure to get good prenatal care.