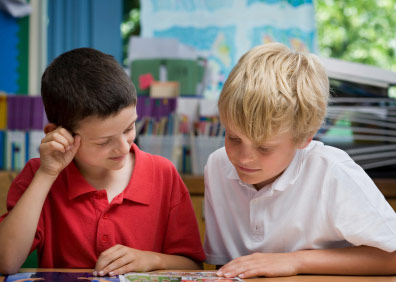 Making friends at school can be hard for any child, but it is especially difficult for children with autism. Most parents and clinicians focus on teaching these children how to navigate social rules. But another effective way to help students with autism in mainstream classrooms may be to train their classmates in how to engage with them, suggests one new study.

Training just a few typical children in a class can influence all the students and may even improve social interactions with children who have autism more effectively than directly helping the affected child.

In a study published in November, researchers at the University of California, Los Angeles, compared this so-called ‘peer training’ to direct one-on-one training for 60 children with autism. The affected children, ages 6 to 11, spent at least 80 percent of the school day in regular education classrooms.

In the peer-training group, the researchers taught three children from the same classroom as the child with autism how to engage students with social difficulties. Both the peer training and individual training sessions lasted 20 minutes, twice a week, for six weeks.

At the end of the training, children with autism who had peer-trained classmates spent less time alone on the playground and had more classmates — those who got the peer training and those who didn’t — name them as a friend compared with children who had only one-on-one social skills training. That means that everyone in the classroom benefited in some way, regardless of whether they were trained.

Even better, the benefits appear to last. Several months after the study ended, children from the peer-trained groups still had better social connections. That was true even for students who changed classrooms and had a different group of peers.

Perhaps this type of peer training should become part of every classroom, not just those that include students with autism. Training socially comfortable children to reach out to their shyer classmates might help bring the latter out of their shells, and potentially assuage some of the negative consequences, such as poor self-esteem, that go along with social anxiety.

Peer training doesn’t boost socializing across the board: Children with autism who had peer-trained classmates didn’t engage more in conversation or get better at taking turns in games.

What’s more, although more of the peer-trained typical children in the new study viewed their classmates with autism as friends, the children with autism didn’t reciprocate. They named the same number of friends both before and after training, suggesting that they didn’t view the time spent interacting as friendship.

One crucial component for the success of peer training may be the children chosen for training. Teachers typically pick good students, but also those who are self-confident and leaders in the classroom.

Mapping out the social networks of children selected to be peer models showed that these students are more likely to be the center of their social group and are generally perceived as more popular than their classmates.

These ratings held true even after the training, which should allay any fears the students or their parents may have that interacting with children who have social difficulties may ruin their own social standing.

Mapping social networks is becoming an increasingly common component of research — as a way to follow the spread of disease, shopping patterns and even obesity. But these studies of peer training show how simple training can spread helpful social skills, making classrooms a better place for every child.