Researchers are angling to develop better techniques to assess social behavior in zebrafish, unpublished studies presented at Neuroscience 2022 in San Diego, California, reveal. And with good reason. The fish can model aspects of autism genetics that are difficult to access in other species, other work shows.

The net impression is that despite their evolutionary distance from humans, zebrafish can say something meaningful about social behavior — and how autism-linked genes can alter it.

“I think people are getting more open to the idea in recent years,” says Yijie Geng, a postdoctoral researcher in Randall Peterson’s lab at the University of Utah in Salt Lake City.

Zebrafish are highly social, Geng and other researchers who study them say. In the wild, they are rarely alone, preferring to form loose aggregations of fish called shoals and sometimes exhibiting tighter, more coordinated schooling behavior.

One challenge is that scoring that behavior by hand is a tedious and time-consuming task, and most tests capture only a few aspects of the behavior at most. Software to analyze the fish’s behavior exists but also has limitations. “It classifies based on parameters important to us, but we don’t know if they’re important to zebrafish,” Geng says.

Enter artificial intelligence. In a poster presentation on Tuesday, Geng detailed a machine-learning program called ZeChat that can analyze the behavior of up to 80 fish at a time.

Geng and Peterson deposited pairs of larval zebrafish into 2-centimeter-by-4-centimeter enclosures and separated them by a transparent piece of plexiglass that runs down the middle of each enclosure (see video above). Cameras record the fish as they interact across the barrier, and the algorithm automatically detects and classifies the behavior.

Other researchers are developing approaches using this principle, known as unsupervised deep learning, to assess the behavior of other model organism species.

“The computer isn’t a zebrafish either, but the advantage it has over a human is that it doesn’t discriminate between details,” Geng says.

The result is a map of 80 different zebrafish behaviors, some of which — such as number 8, eye movement; number 36, adjusting position during dormant phase; and number 40, switching from dormant to active at window — humans can interpret, whereas the meaning of others remains a mystery.

The algorithm describes an 80-dimensional behavioral ‘fingerprint’ for each fish based on how often it performs each of the behaviors.

Geng and Peterson used ZeChat to assess the effects of 237 different drugs on the behavior of wildtype zebrafish. Different classes of drugs produced distinct behavioral fingerprints, and compounds that have similar functions produce similar ones.

Drugs that stimulate one type of dopamine receptor increase sociability in the fish, the researchers found. The drugs make the fish more likely to stay in close proximity to the barrier, beat their tails and swim rapidly, and turn more quickly and frequently than control zebrafish.

Three different drugs in this class — pramipexole, piribedil and 7-Hydroxy-DPAT-HBr — rescue social deficits in zebrafish exposed to the anti-seizure drug valproic acid, which is linked to autism.

The research also appears in a paper posted on bioRxiv in October 2021. Geng aims to develop a version of the algorithm that could analyze the behavior of two zebrafish swimming together without being separated by a barrier.

As interest in zebrafish social behavior swells, researchers are also looking for ways to limit the number of animals needed for studies.

But zebrafish aren’t easily fooled by researchers’ ploys, according to an unpublished study presented in a poster on Wednesday. In a version of a procedure called the open-choice free-swim test, a zebrafish in a tank spends more time at the end closest to a fish in an adjacent tank than at the other end, which has a mirror. 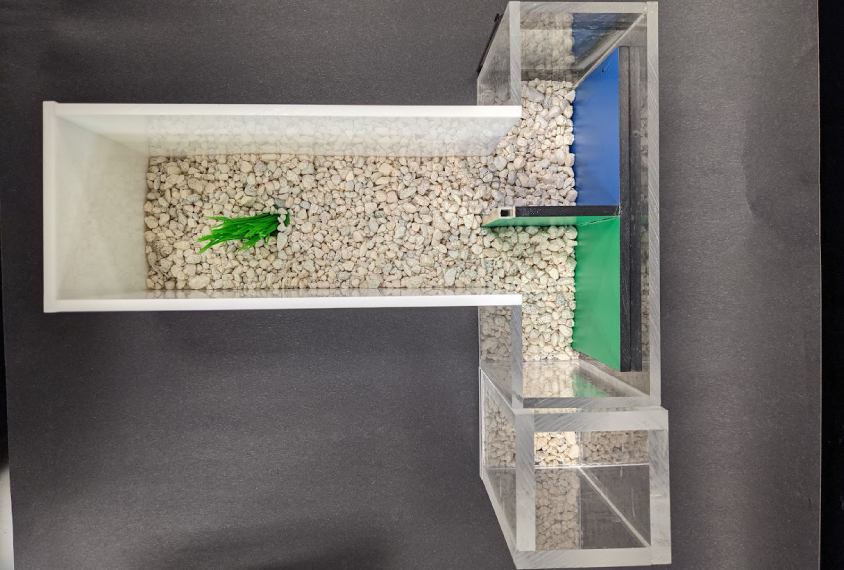 Social swimmers: In a test of social behavior, wildtype zebrafish prefer to spend time near another fish in an adjacent tank than near a mirror.

“Overwhelmingly, our fish preferred the live conspecific over the mirror,” says Drew Velkey, director of the neuroscience program at Christopher Newport University in Newport News, Virginia, who presented the work. “They prefer the high-fidelity stimulus.”

Velkey’s team previously showed that zebrafish prefer to swim near a live shoal of other zebrafish than near a video of a shoal or an animatronic model. Female zebrafish can even tell the difference between an established shoal of fish that have been swimming together for seven days and a newly formed shoal — and prefer to swim near the former.

A similar free-swim test shows that fish lacking the autism-linked gene GRIN2B have social deficits, according to a poster presented on Monday.

When three-week-old fish are placed in a long enclosure with a chamber containing another fish at one end and an empty chamber at the other, the GRIN2B fish show no preference for one end or the other. By that age, wildtype fish will choose to spend most of their time at the end closest to the other fish.

“We hadn’t run social-behavior assays before we had these fish,” says Josiah Zoodsma, a graduate student mentored by Lonnie Wollmuth and Howard Sirotkin at Stony Brook University in New York, who presented the work.

The researchers first conducted standard tests of locomotion, learning and sensory responses with the GRIN2B fish “and saw nothing. They were completely wildtype,” Zoodsma says.

Mice lacking GRIN2B die shortly after birth, so the team was baffled to find no obvious abnormalities in the zebrafish model. But meanwhile, social-behavior studies of zebrafish were starting to become better known.

“All that led us to start looking at social behavior,” Zoodsma says.

GRIN2B encodes a part of the NMDA receptor, which is involved in the transmission of excitatory nerve signals. Other subunits of the NMDA receptor appear to be upregulated in the GRIN2B fish, perhaps protecting the fish from displaying other abnormalities. “But even with that adaptation, it doesn’t fix this [social behavior],” Zoodsma says.

What’s more, fish lacking other NMDA receptor subunits do not have social deficits. “It really highlights the specificity of what 2B is doing in development,” he says.

The findings were also published in Molecular Autism in September.