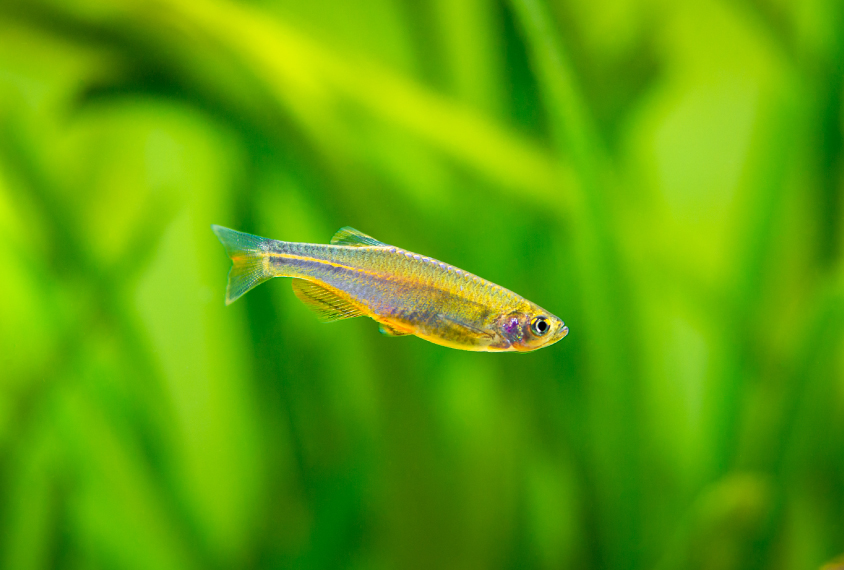 Solo swimmer: Zebrafish with a mutation in one of two oxytocin receptors seek out more alone time than control fish.

Researchers presented the findings virtually today at the 2021 Society for Neuroscience Global Connectome. This zebrafish model might help scientists explore the biology underlying social problems in autism, the researchers say.

Previous studies in mice and people suggest that oxytocin may help promote social behaviors, “but we don’t really understand why oxytocin has an effect on socialization and other behaviors,” Soaleha Shams, a postdoctoral researcher in the lab of Lars Westberg at the University of Gothenburg in Sweden, said in the presentation.

To study the hormone’s effects, the team turned to zebrafish. These highly social animals generally swim in tight groups, with individuals only 10 to 15 centimeters apart. The zebrafish genome encodes two different oxytocin receptors, compared with one in people. Shams and Westberg created fish in which either of the two oxytocin receptors had been deleted. They placed these two types of engineered fish into groups of four and compared their swimming behavior with that of control fish.

Zebrafish missing either receptor generally keep farther apart from one another, they found. The fish also take more frequent excursions away from their group, spending half as much time in the foursome as controls do.

“It’s not that they are not socializing at all,” Shams said. “They are just either socializing in smaller groups or they are taking time away from socialization.”

This partial effect supports the use of zebrafish as an autism model, she added, because it reflects some of the nuanced social challenges seen in autism.

The researchers also investigated how social interaction affects brain chemistry in the zebrafish.

They exposed fish missing each kind of receptor as well as control fish for 20 minutes to either a social stimulus — a video of swimming zebrafish — or a blank screen.

Immediately after exposure, the team removed each fish’s brain and segmented it into four brain regions — the telencephalon and the diencephalon, which together constitute the forebrain; the mesencephalon, or midbrain; and the hindbrain. They analyzed the brain tissue from all the regions together and from each segment individually to determine the levels of six different types of neurotransmitters the tissue contained.

In comparing brain regions, the researchers found the biggest socialization-related changes in the midbrain. Overall, in response to the social stimulus, they observed different patterns and trends of brain chemicals across the four brain areas in the fish missing each oxytocin receptor. This suggests that the two receptors may play different roles in regulating social interactions and other aspects of fish behavior, Shams said.

The researchers plan to mine these data for more patterns that link behavioral changes, such as decreased social interaction, with changes in neurotransmitter levels in both models.