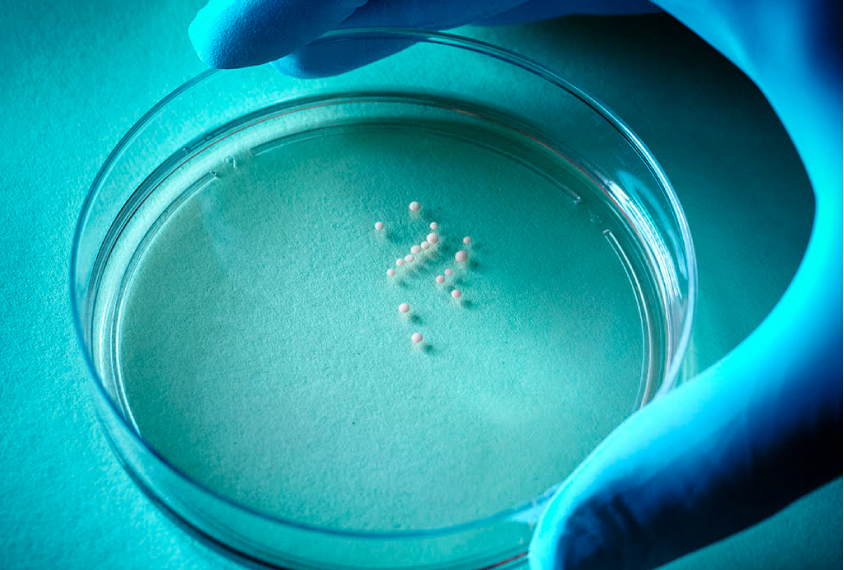 Development dish: Spherical cell cultures with some brain-like features may be useful for modeling the biological mechanisms underlying autism.

3D cultures of human brain cells kept alive for nearly a year undergo transitions in gene activity that resemble those seen in newborns, according to a new study.

The findings — among the most detailed descriptions of older brain organoids to date — suggest that researchers can use these cultures to study the function of autism-linked genes at different stages of pre- and postnatal development, says co-lead investigator Sergiu Pasca, associate professor of psychiatry and behavioral sciences at Stanford University in California.

Many organoids are studied for less than six months, when they resemble prenatal brains. Following the cultures for longer, however, has revealed that they continue to develop: Brain cells called astrocytes and chromatin structures typical of developing brains begin to take shape, according to previous work from Pasca’s team.

The new findings, together with those earlier results, demonstrate that the cultures have an internal timing mechanism, Pasca says. “The cells inside these cultures are undergoing a series of developmental milestones as they’re maintained in the dish without us intervening in any way. There’s probably some sort of internal clock that knows where they are in time regardless of whether they receive some of the cues.”

Our paper looking at the long-term maturation of cortical organoids is out! https://t.co/odhiMtMOCh #organoids #brainorganoids

Understanding that clock will be crucial to ensure that researchers study autism-linked genes in organoids at the correct stages of development, Pasca says. Researchers might even be able to manipulate it to create organoids without having to maintain cultures for months or years.

The findings are “good news” for researchers hoping to use organoids to study autism, says Alysson Muotri, professor of pediatrics and cellular and molecular medicine at the University of California, San Diego, who was not involved in the work.

The researchers created six cortical organoids by reprogramming stem cells from five non-autistic people. They monitored the organoids for up to 694 days as the cultures ballooned to a few millimeters in size.

Gene-expression patterns in the organoids matched those of prenatal human cortical cells in a database called BrainSpan, the researchers found. After about 250 to 300 days — roughly the length of a full-term pregnancy in people — gene expression shifted from prenatal patterns toward those seen in newborns. The work was published in Nature Neuroscience in February.

The organoids heavily expressed genes related to neuron and synapse development until day 200 or so, and then they started to express more genes involved in synaptic function and the development of other brain cells, such as astrocytes.

Genes encoding subunits of the receptor for glutamate, a chemical messenger used by neurons, progressively shifted their expression levels between days 250 and 300, matching a transition that occurs around birth in the BrainSpan database and in rodents.

“This is really incredible, because it means that the subunits know when to transition,” Pasca says.

The researchers tracked expression in these genes — GRIN2A and GRIN2B — along with other genes strongly linked to autism, intellectual disability or other conditions. Most of the autism and intellectual disability-linked genes are expressed in the organoids’ early stages, when neurons are forming, the researchers found. Some are also expressed later, when synapses are created.

For many genes, expression peaked at multiple times. Researchers studying these genes only in month-old organoids may miss functions they have during later brain development, Pasca says.

“Knowing when the gene of interest is expressed is really, really key,” he says. 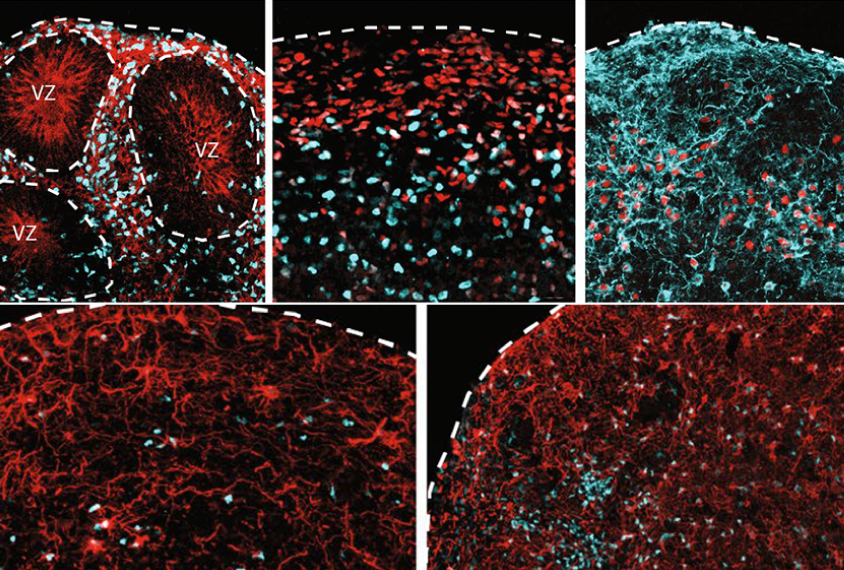 Time warp: The gene-expression patterns of neurons (top) and astrocytes (bottom) in the organoids shift over time.

Previous research found elevated levels of cell-stress markers in organoids; some of this stress was mitigated by transplanting the cultures into newborn mice.

“Stress is probably induced by something in the culture or the way the cells are being grown,” says Arnold Kriegstein, professor of neurology at the University of California, San Francisco, who led the earlier cell-stress study and was not involved in the new work.

But cells from BrainSpan and a second database of 40,000 cortical cells similarly express genes involved in stress pathways, Pasca found, suggesting that the low, stable levels of stress markers seen in organoids are not indicative of problems. Many of these genes also play key roles in typical brain development, he says.

Still, the organoids are not perfect replications of the human cortex, he says: They lack some cell types, including inhibitory neurons, microglia and the precursor cells that develop into oligodendrocytes. Electrical input the developing cortex receives from other parts of the brain is also absent.

“What we provide here is a framework for assessing how closely the in-vitro system resembles in-vivo development for a given gene,” says co-lead investigator Daniel Geschwind, distinguished professor of neurology, psychiatry and human genetics at the University of California, Los Angeles.

It would be misleading to say that these cultures look like the postnatal brain, Pasca says. “They resemble aspects of the postnatal cerebral cortex.”

Regardless, the work shows that organoids can be used to study conditions at later stages of development, including those that don’t emerge until after birth, Kriegstein says.

“I think it’s a very nice and interesting paper that’s going to help to move the field,” he says.