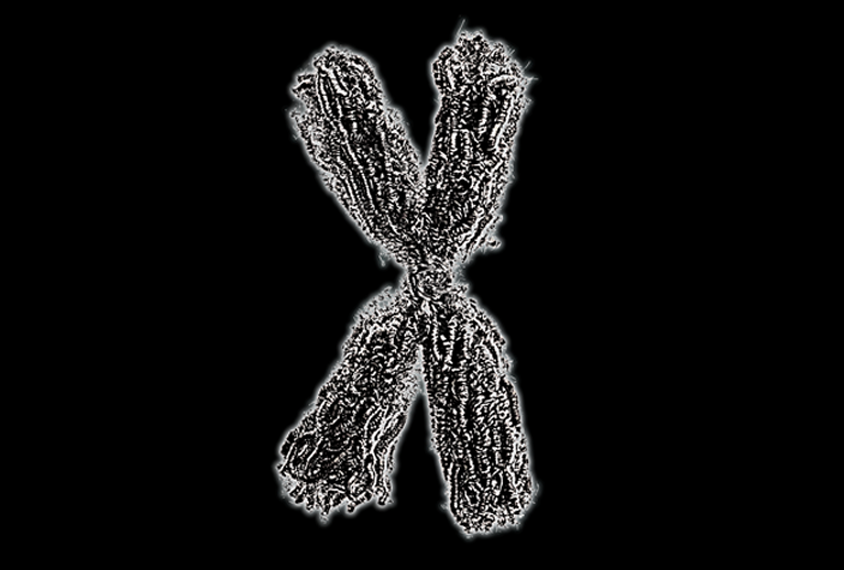 Hot spots: Four sites on the X chromosome were 60 percent richer in rare, damaging variants in autistic boys than in their non-autistic brothers.

Rare gene variants a boy inherits from his mother’s X chromosome can increase his chances of having autism, Tourette syndrome or attention-deficit/hyperactivity disorder (ADHD), a new study finds.

The work also implicates the X-chromosome gene MAGEC3 in autism for the first time. Analyzing the X chromosomes of more people with autism or other neurodevelopmental conditions could help “identify additional risk genes,” Willsey says. “Investigation of these genetic risk factors may illuminate mechanisms underlying risk and resilience for these conditions, and therefore putative treatments.”

Autism, Tourette syndrome and ADHD appear significantly more often in boys, even after potential diagnostic biases are taken into account. One possible explanation is that boys, who typically have only one X chromosome, cannot compensate for an altered copy of an X-chromosome gene in the same way that girls, who have two X chromosomes, can.

Previous attempts to find gene variants on the X chromosome that are associated with autism, Tourette syndrome and ADHD in idiopathic cases — in which there is no known genetic cause — proved fruitless, however, perhaps in part because those efforts didn’t analyze enough people to detect such variants.

Willsey and his colleagues analyzed exomes — the protein-coding regions of the genome — from 65 families that have one autistic son and at least two non-autistic sons, all born to non-autistic parents, and that are part of the Simons Simplex Collection (SSC). (The SSC is funded by the Simons Foundation, Spectrum’s parent organization.)

The non-autistic women in the study, they found, consistently passed four X chromosomal regions — home to 149 genes — down to their autistic sons but not their non-autistic ones. This inheritance pattern may reflect the way in which DNA in a woman’s X chromosomes can shuffle, or ‘recombine,’ during the creation of egg cells.

The four sites were 60 percent richer in rare, damaging variants in the autistic sons than in their non-autistic brothers. And the autistic boys possessed roughly twice as many rare, damaging variants affecting genes that rank among the top half expressed in the brain. Similar findings emerged from a follow-up analysis of 11,391 autistic boys and their 1,549 unaffected brothers who are participating in SPARK, another Simons Foundation-supported effort.

When the researchers analyzed exome data from 570 boys and men with Tourette syndrome and 332 boys and men with ADHD, they found even stronger effects than those seen in people with autism. Those with Tourette syndrome were 2.1 times more likely to have rare damaging variants on their X chromosomes than controls, whereas those with ADHD were 2.5 times more likely. The scientists detailed their findings online last month in a preprint article submitted to Nature Communications.

A further analysis of an additional 13,052 autistic boys and men and 2,295 non-autistic controls from the combined SSC and SPARK datasets surfaced the new association between autism and MAGEC3. This gene belongs to the melanoma antigen (MAGE) family, which is associated with a wide range of conditions, including neurodevelopmental ones.

“They were able to identify an autism risk gene that has been undetected until now,” says Aaron Besterman, assistant clinical professor of psychiatry at the University of California, San Diego, who did not take part in this study. “As more is uncovered, it may shed some light on the mechanism of male genetic vulnerability to neurodevelopmental disorders, and specifically on the overlapping risk of these disorders, which commonly occur together in patients, especially males.”

Research on the apparently higher rates of neurodevelopmental conditions in boys often focuses on the ‘female protective effect,’ Besterman says. This theory suggests that girls are inherently more resistant to factors that predispose someone to autism. “There has been a lot less emphasis on male genetic vulnerability, so it’s nice to see some new work on this topic,” he says.

Spontaneous or ‘de novo’ mutations in non-sex chromosomes are linked to decreased nonverbal IQ, past studies show. The researchers did not, however, see a similar association with rare, damaging variants on the X chromosome in autistic boys. Instead, autistic boys with above average nonverbal IQ may have 40 percent more of these variants than controls.

All in all, about 20, 24 and 28 percent of rare, damaging variants on the X chromosome may be linked to having autism, ADHD or Tourette syndrome, respectively, the team estimates. These variants, however, contributed to risk in only 2 to 3 percent of the cases for all three conditions.

“This work is absolutely not suggesting that mothers in general are responsible for their children’s diagnoses,” Willsey says.