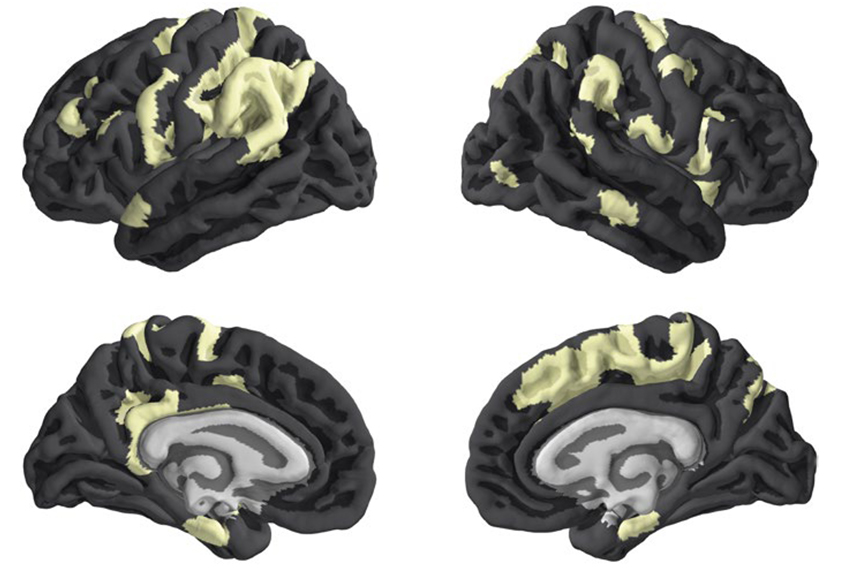 The X chromosome holds stronger-than-expected genetic sway over the structure of several brain regions, a new study finds. The X-linked genes that may underlie this oversized influence have ties to autism and intellectual disability.

“There were already hints that the X chromosome was likely to be conspicuous, with how involved it is with the brain,” says lead investigator Armin Raznahan, chief of the section on developmental neurogenomics at the U.S. National Institute of Mental Health. Many X chromosome genes — including those at the root of several autism-related conditions, such as fragile X syndrome and Rett syndrome — are expressed in the brain, for example.

But the new findings suggest that the X chromosome, despite containing only 5 percent of the human genome, has a privileged role in shaping the brain — one that may be particularly relevant to developmental conditions. What’s more, this influence may be stronger in men than in women, the study shows.

“What they’re showing is X is fundamentally different,” says David Glahn, professor of psychology at Harvard University, who was not involved in the new study. “It’s off the scale.”

Research over the past decade has linked genetic variation to shifts in brain features, such as overall size or patterns of connectivity between regions, Glahn says. But “the X chromosome and the Y chromosome are fundamentally understudied,” because including them requires extra analytical legwork, he says.

That oversight may soon wane, thanks to powerful datasets that compile gene sequencing and brain imaging data from tens of thousands of people. The new work is the latest in a series of studies that tap the UK Biobank, which houses genetic and imaging data from almost 40,000 people.

“The ability to look into [the] X chromosome and the influence on brain structure has really not been possible until these huge datasets have become recently available,” says Neda Jahanshad, associate professor of neurology at the University of Southern California in Los Angeles, who was not involved in the study. “This is a really important initial investigation into that.”

Raznahan and his colleagues analyzed genetic data and magnetic resonance imaging scans from 32,256 adults, roughly half of whom are women, from the general population.

From the brain scans, the researchers determined the thickness, volume and surface area of 358 regions of each participant’s cortex. They searched for links between these structural features and tweaks in the participants’ genetic code and then calculated the proportion of variation in the cortical features tied to that on the X chromosome. Raznahan and his team reported their results in July in Nature Neuroscience.

The X chromosome exerts a larger influence on the structure of several brain regions, including the prefrontal cortex, sensorimotor cortex and temporoparietal junction, than would be expected for its genomic size, the researchers found. And this pattern was more apparent for surface area than for a brain region’s thickness or volume. In fact, genetic variation on the X chromosome explains more than 20 percent of the variation in several regions’ surface areas, the study found.

The chromosome’s influence on the temporoparietal junction is particularly intriguing when it comes to autism, Glahn says. The region’s activity and folding is linked to theory of mind, or the ability to intuit the feelings and thoughts of others. Some autistic people find this skill challenging.

“The structural organization certainly gives an initial insight,” Jahanshad says. But a key next step is to correlate genetic variation on the X chromosome with patterns in functional imaging data and actual behavioral traits. (Raznahan says he plans to do just this in follow-up studies.)

A separate analysis yielded 20 X-linked genes that are associated with the surface area of the brain regions that show strong X chromosome influences overall. Several of these genes are implicated in intellectual disability, hydrocephalus and autism.

The work complements another UK Biobank study, published in April in the same journal, in which a separate team zeroed in on specific X chromosome genes tied to brain features, such as the integrity of nerve bundles in the brain.

The X chromosome’s sway over brain anatomy was more than twice as large for men than for women, Raznahan’s team also showed. The degree of this heritability difference between men and women correlated with the degree of sex differences in cortical surface area, which tends to be larger in men.

If the X chromosome plays a more significant role in determining some aspects of brain structure in men than in women, as the findings suggest, it may be compensation for men having only one X, whereas women have two.

The results add yet another string of evidence for the oft-contested idea that there are sex differences in the brain. But it’s not clear how the X chromosome might affect these differences or how they tie to actual behavior, Glahn says. “What’s really interesting about this is just asking those sex difference questions.”

Overall, the new work serves as a call to action for researchers to include the X chromosome as they probe the genetic patterning of the brain, Raznahan says. “We’d be delighted if this work in any way contributed to encouraging people to study the X chromosome more.”