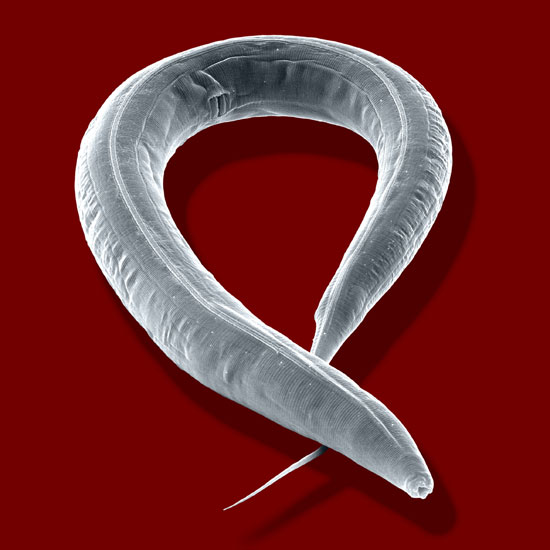 J. Burger Model creatures: Experiments in worms with human neuroligin 4, a gene that has been linked to autism, suggest they can help study the disorder.

Worms, despite their crude nervous system, can be useful models of the genetic underpinnings of autism, according to unpublished work presented today at a meeting of the Genetics Society of America in Boston.

Worms that lack neuroligin have been shown to have a range of sensory problems and are hypersensitive to an herbicide that triggers oxidative stress1. Researchers reported today that inserting neuroligin 4 — a human version of the gene that has been linked to autism — into the mutant worms reverses these abnormalities.

“One of the reasons for studying model organisms is you figure they will mirror the biology you find in a human,” says lead investigator James Rand, chair of the Genetic Models of Disease Research Program at the Oklahoma Medical Research Foundation. “If the human neuroligin protein can deal with oxidative stress in a worm, then presumably it can deal with the oxidative stress problem in a human as well.”

Rand’s team deleted a large part of the neuroligin gene in Caenorhabditis elegans so that the much-studied roundworms produce non-functional neuroligin proteins. Worms have only one version of this gene, whereas humans have several, all of which encode proteins at the synapse, the junction between neurons. Several studies have identified mutations in neuroligin 3 and neuroligin 4 in people with autism.

The mutant worms show a variety of abnormalities in sensory processing, which may be reminiscent of the sensory problems seen in some people with autism. For instance, mutant worms show no response to certain chemicals that are strongly attractive or strongly repellent to normal worms. The mutants are also insensitive to temperature unlike normal worms, which prefer the same temperature in which they were raised.

Protein markers of oxidative stress are five times higher in the mutants than in control worms, and these levels rise further after exposure to paraquat, a toxic herbicide that induces oxidative stress. Mutants exposed to parquat “die off much, much faster” than controls do, Rand says.

The results are provocative because several groups have reported indirect markers of oxidative stress — the build-up of harmful molecules called free radicals — in the blood2 and urine3 of individuals with autism.

Some people have speculated that environmental toxins, particularly vaccines, cause oxidative stress and lead to autism. “That’s a socio-political interpretation,” Rand says, adding that these groups have conflated a correlation with causation.

Rand says his data do not support the idea that oxidative stress causes autism. Instead, he says, certain genetic mutations may cause an individual to be more vulnerable to oxidative stress.

To learn more about the mechanisms involved, Rand’s team is planning to look for a variety of markers of oxidative stress in mice carrying mutations in neuroligins.