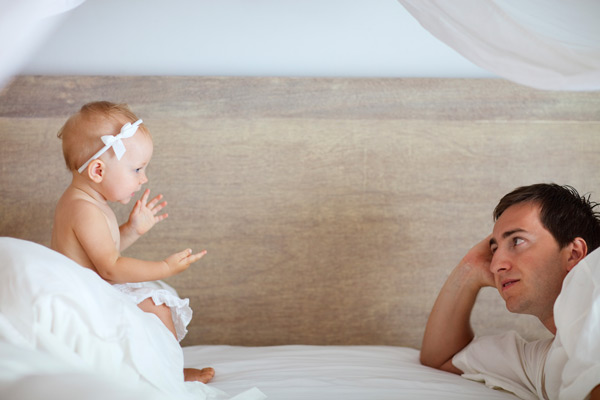 ©AlexanderShalamov/Veer Wee words: At 12 months, children later diagnosed with autism tend to understand object words such as ‘blanket’ better than social words such as ‘hello.’

Children later diagnosed with autism understand different types of words at 12 months than their typically developing peers, according to a poster presented at the Autism Consortium Research Symposium in Boston.

This may be an early reflection of autism symptoms, the researchers say.

“If someone’s socially restricted or has really intense restricted, repetitive interests and behaviors, then it makes sense that their language would reflect that,” says DeWayne Lazenby, research fellow in the Laboratory of Cognitive Neuroscience at Boston Children’s Hospital, who presented the work.

Lazenby and his colleagues studied 213 younger siblings of children with autism, 43 of whom were diagnosed with autism at age 3. So-called ‘baby sibs’ have up to a 20-fold increased risk for developing autism themselves.

The researchers looked at parent responses on a measure of child vocabulary called the MacArthur-Bates Communicative Developmental Inventories, completed when the children were 12 months old. They compared the high-risk children with 113 age-matched children who had no family history of autism.

Lazenby suggests that the differential use of ‘hungry’ may be meaningful because parents and clinicians often use food as a reward when teaching children with autism new skills.

The results on word usage are less clear, as expressive language skills tend to be less developed at 12 months. However, the researchers found that the children with autism are more likely to use the words ‘block’ and ‘eye’ compared with controls. They are also more likely to say ‘eat’ and ‘go’ than high-risk children who do not develop autism.

The preliminary findings are intriguing, as communication deficits are considered a core feature of autism. Lazenby speculates that the comprehension of object words over social ones may signal social impairments, another core autism symptom.

One limitation of the study is that it relies on parents’ reports of their child’s word usage. Also, the vocabulary measurement tool does not reveal the context or frequency of the words used. The fact that children in the high-risk group have an older sibling with autism may also influence the type of language used in those households.

The researchers are looking at word use and comprehension at 18 months, when the children’s expressive language skills are more developed.