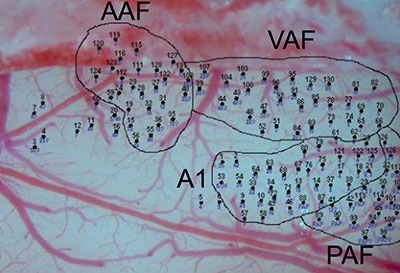 Pincushion pups: Hundreds of electrodes placed in the sound-processing region of rats’ brains detect their response to sounds.

Rat models of autism have a weak and sluggish brain response to speech sounds, but behavioral training can improve their performance. The unpublished results, presented Sunday at the 2013 Society for Neuroscience annual meeting in San Diego, suggest that a similar approach may benefit people with the disorder.

Researchers have seen similar delays in response to speech in the auditory cortex of children with autism, who often struggle with language. But these studies — which read brain activity in noninvasive ways such as magnetoencephalography (MEG) — aren’t able to home in on specific regions within the cortex, says Crystal Engineer, a postdoctoral fellow in Michael Kilgard’s lab at the University of Texas at Dallas. Engineer presented the findings in a poster session at the conference.

By placing hundreds of electrodes in the rats’ brains, the new study pinpointed the source of these deficits as a part of the secondary auditory cortex, which processes sound. Regions in the primary auditory cortex are responsible for initial sound perception.

“There are a lot of theories that language impairment [in autism] is really social impairment, but this says that it really is a sensory processing impairment,” says Ted Abel, professor of biology at the University of Pennsylvania, who was not involved in the study. This aspect may make it more amenable to treatment, Abel says.

The researchers looked at rats born to mothers treated with the epilepsy drug valproic acid during pregnancy. In people, exposure to valproate during gestation leads to language deficits and an increased risk of autism. Rats exposed to the drug have many autism-like features.

Engineer and her colleagues recorded brain activity from electrodes placed throughout the auditory cortex of 11 adult valproate-exposed rats and 6 controls as they listened to recordings of human speech sounds. These sounds vary by either single consonants or vowels — for example, dad/sad/dad or dad/deed/dad. (The researchers raised the frequency of the sounds so that the rats could hear them.)

Response to changes in consonants is slower and weaker in the anterior auditory cortex of the exposed rats than it is in controls, the study found. Other regions of the cortex, as well as the response to vowels, are mostly unaffected.

The researchers then trained the rats to discriminate sounds (such as bad, gad, tad or sad) by giving them a treat if they pressed a lever in response to the correct one. The team presented results from the same behavioral test on a fragile X syndrome rat model at the 2012 Society for Neuroscience annual meeting in New Orleans.

After four weeks of training, the valproate-exposed rats were able to distinguish consonants as well as controls did. Strikingly, their brain activity in the anterior auditory cortex also improved.

“The really cool part of this is that you can actually change the responses in the animal,” says Abel.

Engineer also presented preliminary results from the same experiment in three other rat models: rats that model the autism-related disorders fragile X and Rett syndromes, and those lacking the autism-linked gene SHANK3.

Each of these models has deficits in auditory processing, but the degree varies. Fragile X syndrome rats are the most severely affected: They have a weak brain response to speech sounds across all regions of the auditory cortex.

Rett syndrome rats are mostly unaffected, but they become severely impaired in all forms of speech processing after they begin having seizures. This is reminiscent of the sudden loss of language seen around 2 years of age in girls with the syndrome, notes Engineer.

Paradoxically, rats lacking SHANK3 have a stronger brain response to sound than controls do. The results are preliminary but suggest that a one-size-fits-all approach to treating language deficits may not be appropriate in autism, says Engineer.

The significance of the findings for autism treatments is particularly striking, says Timothy Roberts, vice chair of radiology at the Children’s Hospital of Philadelphia. Roberts has led many of the MEG studies looking at the brain’s response to language in children with autism.

He and his colleagues have found a delay in the brain’s response to sound in children with autism but not in those with other language deficits, such as specific language impairment. The specificity suggests that the delay is a biomarker of autism, says Roberts.

The fact that behavioral training alleviates what looks a lot like the same biomarker in rats is “hugely significant,” says Roberts.

Researchers could couple MEG readings to behavioral interventions in people, he suggests, to monitor whether the training improves brain activity.

Roberts says he hesitated to do these experiments without knowing whether the processing delay in autism would respond to therapy.

“We just didn’t have a mechanism, and I hate to just throw a method at a study without a mechanism,” he says. “This [study] provides a little bit of a mechanism. I think it’s fascinating.”