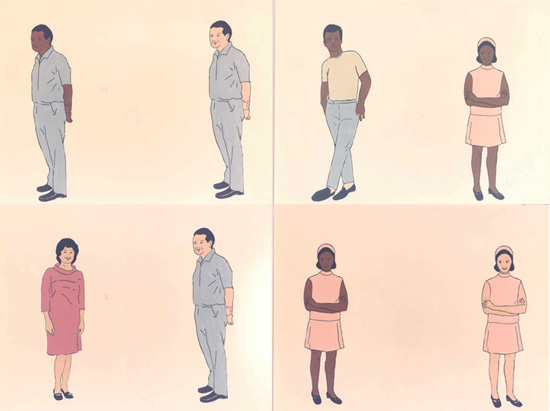 Fear factor: Observations in children with Williams syndrome suggest that racial stereotypes are based partly on fear.

Children with Williams syndrome — a rare genetic disorder that leads to mental retardation and overt friendliness — hold stereotypes based on gender, but not race, according to a report published in April in Current Biology1.

Because behavioral and brain imaging studies have shown that individuals with Williams syndrome don’t show fear when appropriate — such as when they see an angry face — the study supports the controversial idea that racial stereotypes are based partly on fear, researchers say.

Scientists have long debated about whether stereotypes — which are often unconscious and immediate, and arise in children as young as 3 years — have evolutionary origins, or are cultural constructs.

“We have a very bad understanding of how our stereotypes originate, but I think this paper has made a really significant advance in this,” notes Uta Frith, emeritus professor of cognitive development at University College London, who was not involved in the work.

The two disorders are often placed at opposite ends of a social behavior spectrum: people with Williams syndrome are gregarious and empathetic, whereas those with autism would rather interact with objects than with people. Some researchers have proposed that the conditions arise from disturbances of the same brain systems.

The new study tested 20 children with Williams syndrome and 20 IQ- and sex-matched controls on the ‘Preschool Racial Attitudes Measure’2, a standard test that forces participants to make judgments about cartoon people in various scenarios. For example, it may show a black girl next to a white girl and ask which girl is friendly; or show a white girl next to a white boy and ask which one has four dolls.

But the results for racial stereotypes surprised the researchers. The control group showed expected rates of prejudice, assigning negative qualities to dark-skinned cartoon people 83 percent of the time. In contrast, children with Williams syndrome showed racial stereotypes in only 63 percent of their responses, which is not significantly different than chance (50 percent).

“We went in with the hypothesis that racial bias would be reduced in Williams syndrome, but the fact that we have no evidence for that kind of bias at all is pretty striking,” says lead investigator Andreas Meyer-Lindenberg, director of Germany’s Central Institute of Mental Health.

The implications are two-fold: that social fear is an important part of the development of racial stereotypes, and that it is not required for gender bias. “Not all stereotypes are created equal,” he says.

Meyer-Lindenberg is careful to note that these results do not imply that racism or racist tendencies are genetic. The children’s genetic background just happens to be the cause of their lack of social fear. By the same token, if a genetic disease caused you to have no hands, you wouldn’t be able to play the piano. “But that does not imply that the ability to play piano in the general population is genetic,” he says.

Interestingly, using the same cartoon test, Frith has found that children with autism show just as much racial and gender bias as typically developing children do3. This was unexpected. The researchers had predicted that because people with autism have severely impaired social interactions, and don’t consider others’ beliefs, they would not show any stereotypes.

“We were amazed,” says Frith. “Whatever the mechanisms are that lead to the very fast learning of stereotypes, they are intact in autism.”

In the 1960s, scientists proposed the idea that racial prejudice has an evolutionary explanation. The differentiation of human races began about 200,000 years ago, due to geographic isolation of different groups. The idea is that during that time, humans evolved a mechanism of fearing people who did not look like them, as these outsiders would have been more likely to pose a threat4.

A 2005 study in Science gave experimental data to support the theory. Researchers showed black and white participants photographs of black or white faces. When the photos were paired with a mild electric shock, the participants always showed a normal fear response, as measured by minute changes in skin conductance.

When participants saw the photos without an accompanying shock, the fear response disappeared for photos of their own race, but remained to some extent for photos of the opposite race5. The researchers concluded that racial bias comes partly from deep-rooted fear of out-groups.

Experts say the new study supports this hypothesis. Meyer-Lindenberg’s brain imaging research has shown that people with the syndrome have dampened activity in their amygdala — a small and deep region that’s important for emotional processing — when looking at photos of threatening faces6. Because these social fear circuits are disrupted, he argues, this group doesn’t show racial stereotypes.

Others argue that this interpretation oversimplifies the many complex neural and environmental factors that together create prejudices.

Any difference between the Williams syndrome group and the control group could confound the experiment. For example, individuals with Williams syndrome tend to have difficulties with visual perception: they see images in separate pieces, rather than coherent wholes. They may also have trouble with certain kinds of social learning, which could lead to a lack of racial stereotypes.

“It is impossible to infer the role of a specific brain region from this complex pattern of behavior, since the same pattern of behavior could be driven by many other processes,” says David Amodio, assistant professor of psychology and neural science at New York University. “This illustrates the common ‘reverse inference’ problem in science,” he says.

Some brain imaging work has shown that amygdala activity changes with racial attitudes7. But others have found that people lacking healthy amygdalae can still show negative racial attitudes8.

What’s more, amygdala activity has been linked to more kinds of emotional arousal than just fear.

“These race-related amygdala responses could easily reflect an emotional alert, saying, ‘This is important’,” notes Susan Fiske, professor of psychology at Princeton University. Fiske’s work has shown that brain responses to race are “extremely malleable” depending on how the images are presented. “People assume that racism is all about fear and violence, but that’s not necessarily the main thing going on.”

Meyer-Lindenberg plans to repeat the Williams syndrome stereotype experiment using brain imaging to see which circuits are activated during racial versus gender judgments.

He is also interested in the provocative question of whether these findings can be used to reduce racial bias.

For instance, giving healthy participants the hormone oxytocin — which is known to dampen social fear circuitry in the amygdala9 — might temporarily reduce racial stereotypes, he says. “It’s definitely a study I’d like to do at some point.”