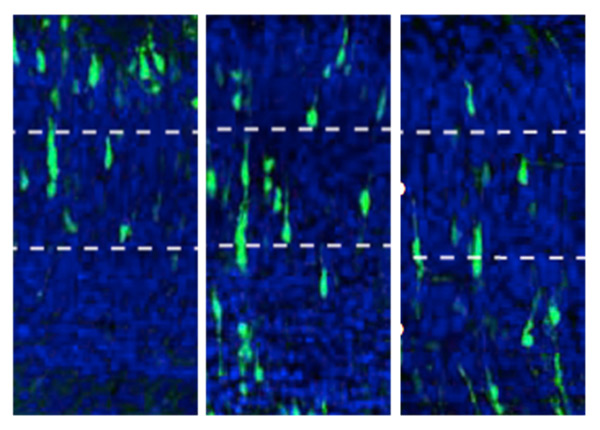 Target practice: An RNA fragment designed to block the doublecortin gene misdirects neurons (right two panels) from their correct destinations (left) even in cells that lack the gene (far right).

A popular method that neuroscientists use to simulate the effects of a mutation may alter the brain and produce misleading results, cautions a study published 18 June in Neuron1.

The technique involves using a fragment of RNA, called a short hairpin RNA (shRNA), to interfere with protein production. It simulates the effects of a harmful mutation without having to change the genetic code, and is widely used because of its relative simplicity.

For years, studies have hinted that the method may have ‘off-target’ effects — meaning that a given shRNA may block more than just its intended target. For example, a 2003 study found that an shRNA designed for the doublecortin gene prevents neurons from migrating to their correct locations in the mouse brain2. Deleting the gene in mice does not show this effect, suggesting that it is an unintended consequence3. In 2006, another study showed that a supposedly benign shRNA can weaken the connections between neurons4.

“We had this controversy that existed for many years,” says Joseph Gleeson, professor of neurosciences at the University of California, San Diego, and lead researcher on the new study. “The neurobiology field continued to use shRNAs because they’re so easy to use, but there was this dark cloud hanging over the field that it might not be completely reliable.”

The new study confirms those fears. Gleeson and his team used an shRNA for doublecortin in mice lacking the doublecortin gene. If the shRNA is specific for doublecortin, it should have no effect on these mice. Instead, it still led to a defect in neuronal migration.

“This paper is very thorough and very convincing” that shRNA techniques are problematic, says Bernardo Sabatini, professor of neurobiology at Harvard Medical School, who led the 2006 study.

“I would really say that it’s the community’s fault, in that we haven’t been insisting on the right controls,” Sabatini says. “Sometimes people don’t want to know the truth.”

The best way to test an shRNA experiment is to do what the new study did: compare its effects with deleting the gene. But that’s easier said than done. Another option is to use multiple shRNAs for the same gene and look for a common pattern.

Most researchers don’t follow these best practices, however. Instead, they typically use a scrambled shRNA sequence that should not bind to any known gene. They then assume that any effects that they see beyond those from the control result from the test shRNA’s effect on its target.

Gleeson and his team created nine new such shRNA controls and found that five of these damage the brain. The results suggest that the off-target effects are the result of the scrambled sequences, although exactly how this happens is unclear.

One reason the technique is so popular is that researchers can simply introduce a piece of DNA into cells and rely on the cells’ machinery to produce large amounts of the shRNA. This increases the chance that researchers will see an effect.

But flooding the cell with RNA in this way may also gum up the machinery by which cells make their own regulatory RNAs, or microRNAs.

“The community doesn’t ever seem to learn this lesson. They have to learn it again and again.”

Supporting this theory, the researchers found that mutations in genes needed for making microRNAs mimic the effects of the doublecortin shRNA. This suggests that in both cases, the cell’s RNA processing machinery is overwhelmed.

“That’s really consistent with a lot of findings in cell culture,” says Peng Jin, professor of human genetics at Emory University School of Medicine in Atlanta, who was not involved in the study. “In the RNA field, people have been moving away from shRNA over the last few years.”

Instead of using shRNA, researchers can introduce artificial RNAs, called siRNAs, into cells or follow a more complex method that uses the cells’ microRNA machinery to produce the RNAs.

The new study evaluated both these methods and found that neither produces off-target effects. siRNA uptake into cells is difficult to track, but the microRNA method, although it is slightly more complicated than shRNA techniques, is a good option, says Gleeson.

“If we could make a recommendation at the end of our paper, that’s the one we recommend people use,” he says.

In the meantime, researchers should interpret results of shRNA experiments with caution, says Sabatini.

“You have to be very careful about accepting those conclusions,” he says. “The community doesn’t ever seem to learn this lesson. They have to learn it again and again.”