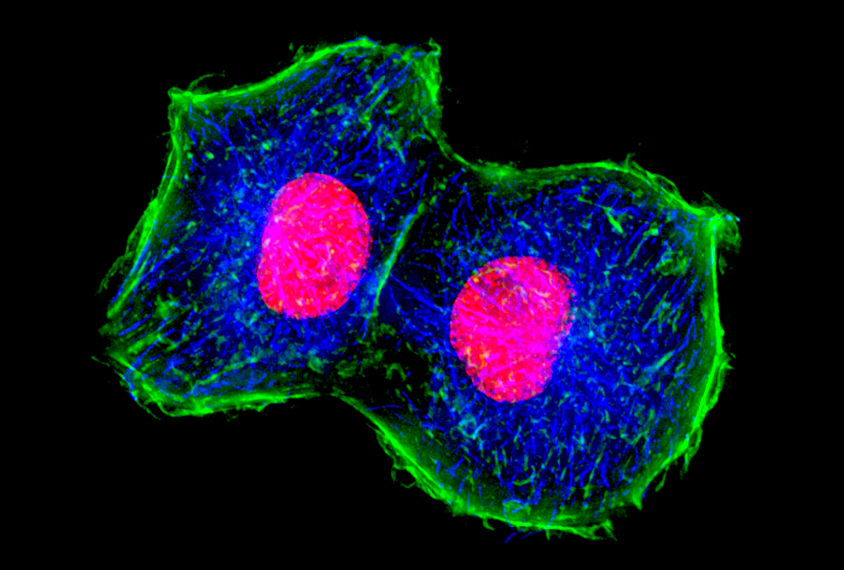 Splitting up: Some autism genes that mostly carry inherited mutations are involved in cell division.

An analysis of whole-genome sequences from nearly 500 families has implicated 16 new genes in autism1. In all of these genes, some mutations are passed from neurotypical parents to their autistic children.

Most studies of autism genetics focus on families in which only one child has autism. Autism in these so-called ‘simplex’ families is often associated with de novo variants, which arise spontaneously in the egg or sperm or shortly after conception. But these mutations are rare, explaining less than 10 percent of autism cases. And they do not account for autism that runs in families.

The families in the new study are ‘multiplex,’ meaning they include two or more children on the spectrum. The genes implicated in the study are distinct from those identified in studies of simplex families, but they seem to work in some of the same molecular pathways.

“As far as we know, this is the first evidence showing that inherited variants impact some of the same pathways as de novo variants,” says lead investigator Dennis Wall, associate professor of pediatrics, psychiatry and biomedical data sciences at Stanford University in California.

Many of the new genes are involved in neurons’ growth; some are expressed in other types of cells, such as those that surround blood vessels.

“This provides an enormous resource for labs that study mechanisms [underlying autism],” says Claudia Bagni, director of fundamental neurosciences at the University of Lausanne in Switzerland, who was not involved in the study.

Wall and his colleagues analyzed whole-genome sequences from 2,308 parents and children composing 493 multiplex families. The sequences came from the Autism Genetic Resource Exchange, a repository of genetic material from families with autistic children.

The team used a tool called the transmission and de novo association (TADA) test, which sifts out genes that may have either inherited or de novo mutations in people with autism. In this case, TADA searched for mutations linked to autism.

The method flagged 69 genes, only 53 of which had been implicated in studies of largely simplex families. The 16 newly implicated genes all carry inherited mutations that contribute to autism.

Those that harbor a preponderance of inherited mutations are involved in ion transport and cell division. By contrast, genes that tend to have only de novo mutations are known to play roles in transcription and DNA packaging.

“[The results are] beginning to unveil the inherited forms of autism,” says Frank Kooy, professor of cognitive genetics at the University of Antwerp in Belgium, who was not involved in the study.

The researchers used other algorithms to comb the genomes for specific types of potentially harmful mutations. These include single-letter swaps and small insertions or deletions that would yield a shortened or missing protein. The team also scanned noncoding regions near and within genes for structural variations, in which thousands of DNA base pairs are deleted, duplicated or inverted.

They narrowed their search to genes that rarely harbor mutations in the general population, and to inherited variants passed down from parents to their autistic children but not their unaffected children.

This strategy led the team to 98 high-impact autism genes with inherited mutations.

Four of these candidates also popped up in the more stringent TADA analysis. Several others share functions with genes TADA flagged, strengthening the case that they contribute to autism. The results appeared in August in Cell.

The team zoomed in on one of the genes flagged by both approaches: NR3C2. The eight children with autism in three families with mutations in this gene have distinct features, including short fourth and fifth fingers, sensory sensitivity and unusual speech patterns. The similarities are “clinically very striking,” Wall says.

The researchers probed the function of NR3C2 by deleting it in zebrafish. The mutant fish show atypical social behavior and sleep disturbances — both of which are autism traits. “It looks like a bona fide autism candidate gene to me,” Kooy says.

Wall and his team have since nearly doubled the number of whole-genome sequences they have from multiplex families. They plan to validate their candidate genes using this larger dataset.