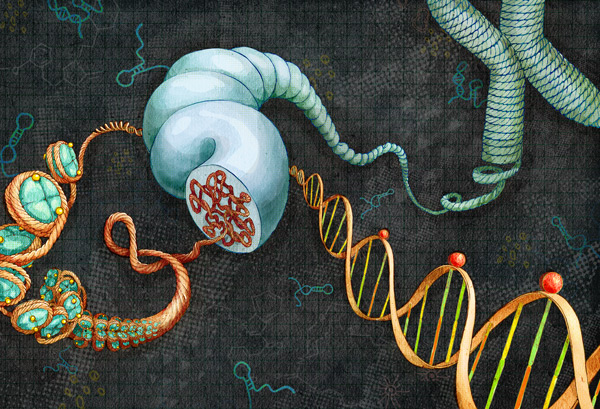 Julia Yellow Flanking factors: Genetic variants in regions between genes may have a significant and under-appreciated role in autism risk.

Much of the genetic risk for autism may reside in regulatory regions of the genome, hidden from traditional methods of sequencing analysis. That’s the upshot of preliminary results from three studies presented yesterday at the 2014 American Society of Human Genetics Annual Meeting in San Diego.

Researchers usually use one of two methods to pinpoint autism-linked mutations. They either scan the genome for duplications or deletions of DNA, called copy number variations (CNVs), that are longer than 5,000 nucleotides. Or they sequence all of the protein-coding regions of the genome, collectively called the exome, of thousands of people with autism.

These methods have revealed hundreds of autism candidate genes, but they ignore 99 percent of the genome. In fact, this so-called ‘junk DNA’ has been shown to regulate the expression of many genes.

In work presented at a poster session yesterday, researchers sequenced the whole genomes of 16 people with autism and their unaffected parents. The exomes of these individuals had not revealed any harmful mutations present only in those with autism.

By contrast, the new study found an average of 37 single-nucleotide variants in each person with autism that are not present in their parents. The importance of these variants is unclear. The study also identified more than 2,000 CNVs longer than 100 nucleotides in the participants with autism.

Three of the people with autism inherited different rare deletions near autism-linked genes from each of their parents, the researchers found.

Studies have suggested that autism may require a ‘double hit’ of mutations, but most methods don’t have the resolution to detect mild variations, says Fereydoun Hormozdiari, a postdoctoral fellow in Evan Eichler’s laboratory at the University of  Washington in Seattle. “We believe there’s additional power in the whole genome that exome sequencing does not find,” says Hormozdiari, who presented the findings.

In another study presented yesterday, researchers sequenced the whole genomes of 250 people who have autism or other neurodevelopmental disordersto look for certain small structural variations.

Balanced chromosomal abnormalities (BCAs) are caused when chromosomes exchange equal-sized chunks of DNA. Large BCAs can be detected by looking at chromosomes under a microscope. But smaller ones remain hidden from all but the most detailed sequencing analyses, says Harrison Brand, a postdoctoral researcher in Michael Talkowski’s lab at Harvard University.

The researchers found that about 19 percent of the people with autism have what appears to be a small harmful BCA. “Increasing the resolution of sequencing could significantly increase the diagnostic yield in autism,” says Brand.

Other innovative ways to analyze sequences are also revealing the importance of noncoding regions in autism risk.

One such approach is to look for mild mutations that need to hit both copies of the chromosome in order to cause symptoms. To find these recessive mutations, researchers often look at people from cultures in which marriage among first cousins is common. These consanguineous families are more likely to carry genetically identical regions on both copies of a chromosome.

They found 16 of these regions in consanguineous families, but surprisingly, 13 of them do not overlap with any genes. Instead, they contain a large number of important regulatory sequences, which are mapped in an online database called ENCODE.

“With autism, one important piece of the [genetic] pie will be regulatory regions,” says Klaus Schmitz-Abe, an instructor in pediatrics at Children’s Hospital Boston who presented the data.

Together, the findings from these new studies show the promise of looking for autism risk in unusual places.