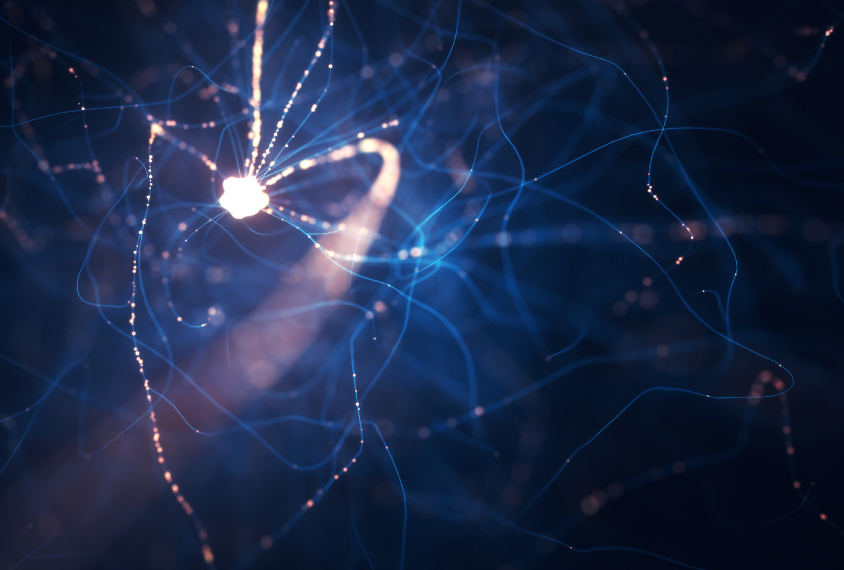 Mind the gap: Lattice-like arrangements of molecules stabilize synapses, the junctions between neurons.

Lattice-like structures that surround neurons may be overly abundant — or scarce — in various brain regions of three autism mouse models. The structures, called perineuronal nets, stabilize synapses (neuronal junctions) and are thought to inhibit their ability to change in response to experience. The findings underscore the importance of brain cells’ surroundings in understanding autism.

Researchers presented the unpublished findings Tuesday and Wednesday at the 2018 Society for Neuroscience annual meeting in San Diego, California

Researchers have found an excess of perineuronal nets in mouse models of Rett syndrome and in neurons made from skin cells of individuals with Costello syndrome. Both conditions are associated with autism.

In one of the two new studies, researchers found evidence of excess perineuronal nets in the dorsal medial striatum of three mouse models of autism: mice lacking CNTNAP2, mice with a mutation in SHANK3, and BTBR mice, an inbred strain that shows social deficits.

The dorsal medial striatum is involved in behavioral flexibility, which autistic people often lack, says Brandy Briones, a graduate student in Elizabeth Gould’s lab at Princeton University, who presented the work. The neighboring dorsal lateral striatum has no surplus of perineuronal nets, however.

In the dorsal striatum, these structures exist primarily around neurons that express a protein called parvalbumin and dampen brain activity.

Gould’s team also found evidence of excess perineuronal nets in a region of the brain involved in social memory in CNTNAP2 and BTBR mice. The region, called CA2, is part of the hippocampus, a memory hub.

In CA2, perineuronal nets surround cells that both excite and suppress brain activity, says Elise Cope, a postdoctoral researcher in Gould’s lab, who presented the work.

Stained tissue from CA2 revealed that perineuronal nets cover a greater area in both of these autism models than they do in controls. In the BTBR mice, the researchers also detected more of a protein associated with the nets’ formation in CA2.

They found either an excess or a scarcity of perineuronal nets in three adjoining parts of the hippocampus — CA1, CA3 and the dentate gyrus — in the autism models.

An enzyme called chondroitinase breaks down perineuronal nets. Briones plans to inject this enzyme into the striata of BTBR mice to determine whether decreasing the number of perineuronal nets eases the mice’s repetitive behaviors.