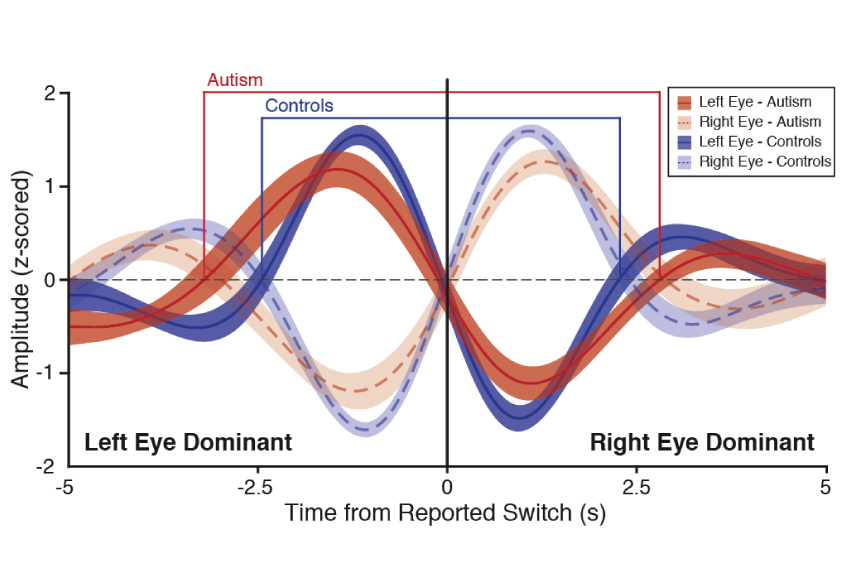 Slow switch: In autistic people (red traces), the brain takes longer to alternate between images presented to each eye.

Brain signals measured during a simple visual task could serve as a biomarker for autism, according to a new study published Thursday1.

The task tests a person’s ability to perceive a phenomenon called binocular rivalry. This occurs when a person views two images simultaneously — one with the left eye and one with the right. The viewer’s brain deals with the competing stimuli by inhibiting one input and then the other. As a result, she sees the images one at a time.

Autistic people’s brains switch between the images more slowly than those of neurotypical people do, the study found.

“This is concrete evidence that there are fundamental differences in visual processing in autism,” says lead investigator Caroline Robertson, assistant professor of psychological and brain sciences at Dartmouth University in Hanover, New Hampshire.

The results also bolster a long-standing theory that autistic people have too little inhibitory activity in the brain.

People with autism often have heightened responses to sights, sounds and touch, and the intensity of these responses tracks with the person’s degree of difficulty with social and emotional processing. However, the biological reason for this relationship is unknown.

The new study suggests that too little inhibition of brain activity might underlie the link, says Mark Wallace, dean of the graduate school at Vanderbilt University in Nashville, Tennessee, who was not involved in the work.

However, those findings are not conclusive, because binocular rivalry is not a direct measure of the balance of excitatory and inhibitory activity in the brain, cautions Ilan Dinstein, associate professor of cognitive and brain sciences at Ben Gurion University in Beer Sheva, Israel.

Robertson’s team had shown in a 2013 study that autistic people perceive the images switching in a binocular rivalry task more slowly than neurotypical people do2. The new work shows “a neural signature of that effect,” Robertson says.

In the new study, 18 autistic adults and 19 neurotypical adults sat at a computer screen that showed an image of a red circle to the left eye and a green one to the right eye. The researchers asked participants to indicate which color they saw, while measuring their brain activity using electroencephalography (EEG).

Autistic and typical participants alike reported the color changing at the moment the EEG signals showed their brains switching between the two. But autistic people’s brains switch more slowly than those of typical people, the EEG showed.

The autistic people who score highest on the Autism Diagnostic Observation Schedule, a gold-standard test for autism, tend to switch the most slowly.

When the researchers alternated a single image that they presented to both eyes, they saw no difference in EEG activity between autistic and neurotypical people. This suggests that the findings are specific to binocular rivalry and do not simply reflect a slow response to new images, the researchers say.

“With one single electrode at the back of the head, we are picking up a fundamental difference in the rate of rivalry,” Robertson says.

A machine-learning algorithm that analyzes these EEG readings predicts an autism diagnosis with an accuracy of 86.5 percent, the researchers found.

This accuracy is similar to that of existing autism screens in young children — for instance, those that assess how much time a child spends gazing at faces, Robertson says. “It makes me wonder: If we were to put this and some of the social markers together, could we really ace [diagnosis]?”

Robertson’s team looked at binocular rivalry in verbal adults who require little support, so it is unclear whether the results would hold true in children or in nonverbal adults with severe autism traits.

If they do, the test could be a potent diagnostic tool, because it is simple to perform and does not require the participants to speak. It could also be used in animal studies and clinical trials.

The association between brain activity and diagnostic test scores “gives me some degree of optimism that this could be used as a very simple but very powerful tool in the diagnostic arena,” Wallace says.

However, that association is “relatively weak,” he says. An important next step will be to discern which autism traits relate most strongly to binocular rivalry.