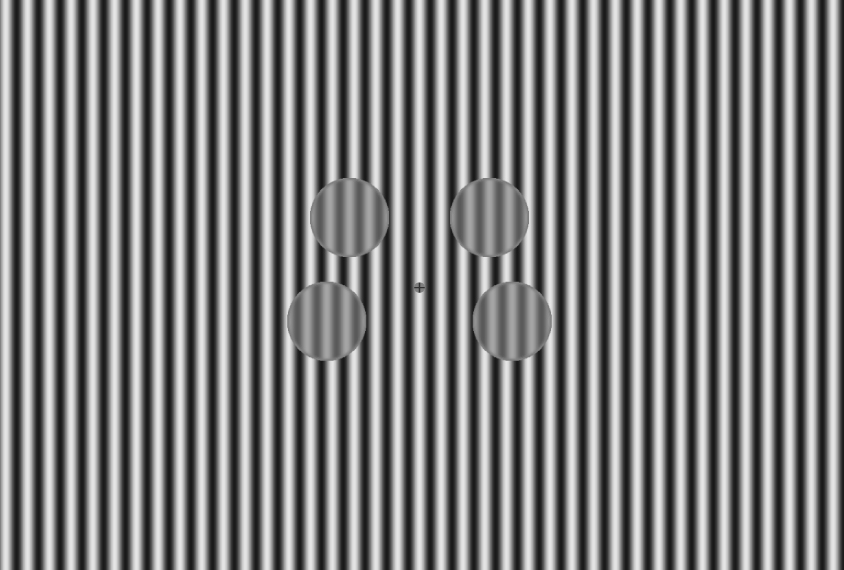 Spot this: Brain responses to this visual stimulus could reveal which autistic people can benefit most from the investigational drug arbaclofen.

This article was originally published 14 May 2021, based on preliminary findings presented at the International Society for Autism Research annual meeting. We have updated the article following publication of the study on 5 January 2022 in Science Translational Medicine. Updates appear below in brackets.

The investigational drug arbaclofen makes autistic people’s brains respond to a visual task more like non-autistic people’s brains do, according to unpublished findings presented virtually last week at the 2021 International Society for Autism Research annual meeting. (Links to abstracts may work only for registered conference attendees.).

The task could be used to identify autistic people who might benefit the most from arbaclofen. The drug has shown potential to lessen some autism-like traits in animal studies but yielded mixed results in clinical trials. (The Simons Foundation, Spectrum’s parent organization, holds the patent rights to arbaclofen.)

Enriching future clinical trials of arbaclofen with people likely to respond to it would help researchers detect differences between experimental groups, says lead researcher Gráinne McAlonan, professor of translational neuroscience at King’s College London in the United Kingdom, who presented the work.

A leading theory of autism proposes that the condition involves an imbalance of excitation and inhibition in the brain — a balance that is typically mediated at least in part by glutamate, an excitatory neurotransmitter, and gamma-aminobutyric acid (GABA), an inhibitory one.

But studies investigating the concentrations of these chemical messengers in the brains of autistic and non-autistic people have failed to find significant differences. There also appear to be no differences in the levels of one type of GABA receptor, GABA-A. Arbaclofen activates another GABA receptor, GABA-B.

“These small or null effects are actually informative,” McAlonan says, because they suggest that studies examining the effects of arbaclofen on autistic people should take place under dynamic conditions, to better capture the brain’s signaling balance or imbalance.

In the new study, McAlonan and her colleagues gave [19 autistic adults and 25 non-autistic controls] a single dose of arbaclofen or a placebo. They then measured brain levels of GABA using magnetic resonance spectroscopy. They also monitored brain activity via electroencephalography (EEG) while the participants watched four circles with flickering black and white stripes on a computer screen.

Among all participants who received placebo, the flicker produced an EEG response in the brain’s occipital lobe, a region involved in visual processing. And when the team made the flicker more difficult to detect — by showing the striped circles on a similarly striped background — the EEG signal weakened.

Among controls, that signal tends to weaken less for those with higher levels of GABA in the occipital lobe, the team found. But this pattern did not hold among the autistic participants, hinting that GABA regulates visual perception differently in autistic people.

Decreasing the contrast between the stripes and the background also weakened the EEG signal, but only in controls who were given the placebo.

After taking arbaclofen, though, the autistic participants showed the same brain responses as controls who had taken placebo.

McAlonan and her team are using the same visual task to investigate the effects of GABA-A agonists, as well as drugs that target serotonin receptors.

“There will be no one size fits all, and what we need to do is achieve a repertoire of pharmacological options,” she says.