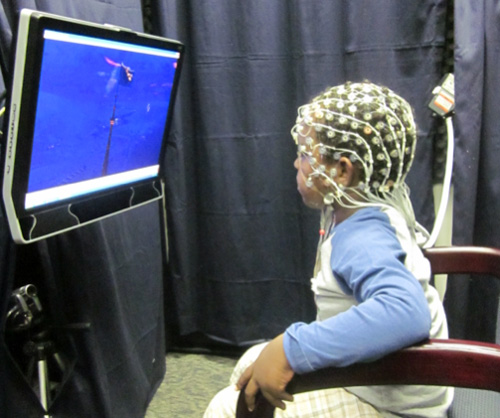 Look and learn: Tracking children’s brain responses to a series of colored shapes on a screen may help researchers understand how they learn.

Some children with autism have trouble learning visual patterns, and others employ a distinctive brain process to do so, suggests a study published 13 May in Developmental Science1.

The study is the first to look at a particular type of learning, called visual statistical learning, in children with autism. This type of learning may enhance social skills by helping children recognize patterns in others’ social behavior.

Autism research frequently excludes preschoolers and severely impaired children. “The young kids [and] the minimally verbal kids give us variable, sometimes limited behavioral responses that don’t always reflect what they know,” says study leader Shafali Spurling Jeste, assistant professor of psychiatry and neurology at the University of California, Los Angeles (UCLA). Understanding how these children think and experience the world is key to designing appropriate interventions.

The new study relied on electroencephalography (EEG), a noninvasive form of brain imaging, to look at 2- to 6-year-old children with autism. The researchers say the method can help scientists understand how children across the autism spectrum learn.

“There is a lack of good studies in autism looking at learning itself,” says Stewart Mostofsky, director of the Laboratory for Neurocognitive and Imaging Research at the Kennedy Krieger Institute in Baltimore, who was not involved in the work. “We tend to look at the ability to perform tasks rather than learn novel patterns.”

He adds that the approach used in the new study is especially promising because it is so broadly applicable across the autism spectrum. “It potentially opens up an avenue for being able to study learning processes in nonverbal and otherwise unresponsive children.”

Jeste and her colleagues used EEG to track brain activity in 45 children with autism and 23 controls as they watched colored shapes appear on a computer screen. The shapes came in pairs — for example, a pink square always followed a blue cross; a yellow circle always followed a green diamond — but the order in which the pairs appeared was random.

EEGs record bursts of neural activity known as event-related potentials, or ERPs, in response to different sensory stimuli. ERP waves are named based on when and where the activity occurs, and the researchers zeroed in on several of these ERPs to determine whether the children had learned to recognize shape-pairs.

These results suggest that typically developing children quickly learn the pattern: When they see the first member of a shape pair, they know what the second will be, and their brains react differently to an expected shape.

Children with autism don’t show this trend — at least, not as a group. Individually, some children do learn the pattern, but do so differently than controls.

“You look at those wave forms and [at first] it’s like, okay, kids with [autism] can’t learn,” says Jeste. “But there’s more to the story than that.”

The children with autism who have relatively high nonverbal intelligence quotients (IQ) show a larger N1 response to the unexpected first shape of a pair than to the expected second shape. And children with autism who have relatively well-developed social skills, such as imitation, smiling and use of social gestures, show a larger P300 response to the second member of a shape pair than to the first.

While these patterns are opposite to those of the controls, they are also different from those seen in children with autism who have low nonverbal IQ and social scores. Those children have virtually the same brain response to both expected and unexpected shapes.

“They were really able to subgroup the kids with autism and find different processes within these kids,” says Sara Jane Webb, associate professor of psychiatry and behavioral sciences at the University of Washington in Seattle, who was not involved in the work. That finding, she says, hints at some of the biological underpinnings of heterogeneity within the autism spectrum.

The results also illuminate one of the most puzzling aspects of autism: Individuals with the disorder struggle to develop skills that most people learn without consciously realizing they have learned something.

“A lot of the social rules that we use with each other are implicit,” says Scott Johnson, professor of psychology, psychiatry and biobehavioral sciences at UCLA and a member of the study team. For example, Johnson says, young children generally learn the meaning of a smile, or when and how to wave and point, simply by watching others.

The brain finds and deciphers patterns using a form of implicit learning called statistical learning. Studies on statistical learning have great potential to inform autism research, but most of the work done to date has focused on sound rather than sight. For example, a few studies have found that picking out patterns in a stream of sounds helps young children learn language2, a process disrupted in children with autism3.

The new study is the first to investigate visual statistical learning in autism. But some researchers say further work is needed to validate that the EEG measures used in the study truly indicate learning.

Most studies of visual statistical learning rely on behavioral paradigms, such as asking children to point or say something about the sequence of shapes. “I like that [the new study] used ERPs to go beyond the behavioral paradigms,” says Matthew Roser, lecturer in psychology at Plymouth University in the U.K., who was not involved in the work. “I think the flip side of that is they didn’t have any behavioral data to suggest that the sequences had in fact been learned.”

Jeste says her team is developing a behavioral measure of learning to address this criticism. She and her colleagues are analyzing a second round of EEG data to look at whether EEG patterns can predict the response to treatment. Since the first study, the children have completed an intensive treatment program at UCLA involving an individualized mix of interventions. Jeste says she hopes that EEGs can help clinicians match children with interventions more efficiently.

The researchers are also studying children younger than age 2 at high risk of autism, including baby siblings of children with the disorder, in order to understand how and when these learning differences emerge in the course of development.