Vision problems in Rett syndrome could serve as biomarker 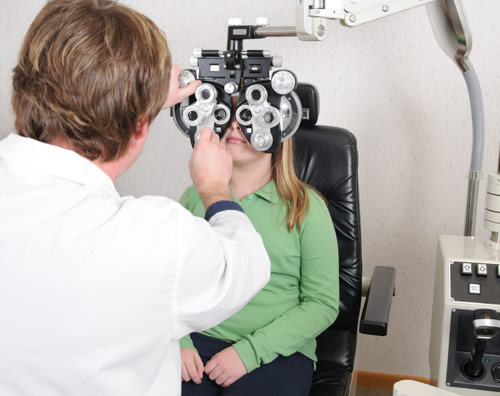 Sight unseen: Little is known about the visual abilities of girls with Rett syndrome.

Mice missing the Rett syndrome gene MeCP2 show a gradual decline in vision, and too much inhibitory signaling in the visual cortex, according to unpublished research presented Thursday at Cell Symposia: Autism Spectrum Disorders: From Mechanisms to Therapies in Washington, D.C., a satellite conference of the Society for Neuroscience annual meeting. Normalizing the balance of excitatory and inhibitory signals restores the animals’ sight, the researchers report.

This abnormality in the visual area of the brain could be one of the first steps in a developmental cascade in the mice and, perhaps, in people with Rett syndrome, the researchers say.

Preliminary research in girls with Rett suggests that clinical trials for the syndrome could track visual sharpness, or acuity, in the participants to assess a drug’s effectiveness, says Takao Hensch, professor of molecular and cellular biology at Harvard University. Hensch was presenting work led by Michela Fagiolini of Children’s Hospital Boston.

“This is a totally objective, quantifiable measure,” Hensch says. “This could be a biomarker that would indicate the efficacy of any type of treatment.”

Normal mice open their eyes 13 days after birth. Their visual acuity gradually rises until day 30 and then plateaus. Mice missing MeCP2, in contrast, develop vision normally until day 30, but then their acuity steeply drops, Hensch found.

This mimics what happens in the cognitive development of girls with Rett syndrome, Hensch says. “If you ask parents, that’s what their kids show. They develop seemingly normally, and then they suddenly diverge.”

In collaboration with Fagiolini and Charles Nelson of Children’s Hospital Boston, Hensch also has found preliminary evidence of visual abnormalities in girls with the disorder. The researchers found that on electroencephalographs, which measure brain activity, nine girls with Rett syndrome showed delayed onset of brain waves in response to a visual stimulus compared with controls.

These data are intriguing, particularly because similar problems in sensory development have been shown in mouse models of fragile X and Angelman syndromes, other researchers say.

“It’s interesting to me that there’s some convergence,” says Michael Ehlers, chief scientific officer of neuroscience research at Pfizer, who did the work on Angelman syndrome. “This is more evidence that primary sensory processing may be a good way to detect disease, monitor progression and monitor response.”

But others point out that abnormal patterns in the visual cortex may not be relevant to the disorder as a whole.

“There is a rich history of the visual system being a springboard for discoveries on cortical plasticity,” says Mriganka Sur, professor of neuroscience at the Massachusetts Institute of Technology, who’s leading a clinical trial to test insulin-like growth factor as a treatment for Rett.

Still, Sur says, no study has ever reported visual problems in people with Rett syndrome. “I do not believe there is a decline in sensory perceptions, whether vision or audition or whatever, because these things would be noticed.”

Sights, sounds and sensations are essential for shaping the circuits of the developing brain. Beginning at birth, there are windows of time in which certain regions of the brain are ‘plastic,’ or extremely sensitive to sensory inputs. Once these so-called critical periods end, the circuits become stable and, by and large, inflexible.

For example, if a kitten is raised in complete darkness through the critical period of visual cortex development, it will not learn to see even if later taken out of the dark.

More than a decade ago, Hensch showed that, somewhat counterintuitively, critical periods are activated by gamma-aminobutyric acid, or GABA, a chemical messenger that dampens electrical signals in the brain.

“It’s very low early in life, and comes on at different times in different brain regions,” Hensch says. For example, the critical period of the primary cortex, where light signals are initially processed, occurs before that of regions needed for more complex processing in later stages.

Hensch and others later showed that these waves of inhibition come from a subset of cells that express GABA, called parvalbumin-positive basket cells1.

In the past few years, Hensch has applied these discoveries to autism.

One popular hypothesis about the disorder is that it is caused by an imbalance of excitatory and inhibitory signaling. In 2009, Hensch reported that nine mouse models of autism — including animals missing MeCP2 — have defects in parvalbumin cells at various ages and in different parts of the brain, compared with controls2.

Last year, Huda Zoghbi’s team at Baylor College of Medicine in Houston, Texas, reported that mice lacking MeCP2 only in GABA cells produce less of the neurotransmitter than controls, and show the full array of behavioral problems — such as poor memory and repetitive clasping of forepaws — reminiscent of the syndrome.

In the new study, Hensch’s team investigated the visual cortex in mice lacking MeCP2. The researchers found that once the mice’s eyes open, their parvalbumin cells are hyper-connected, quieting brain activity.

The researchers also showed that the visual problems and connectivity defects in these mice can be reversed.

Knocking out a gene called NR2A, which encodes part of the NMDA receptor, restores vision and balances excitatory and inhibitory signals, the researchers found.

The results suggest that blocking NMDA receptors with a drug “would be a very interesting therapeutic approach,” Hensch says.

One big caveat of the study, however, is that unlike mice, girls with Rett syndrome do not entirely lack the MeCP2 protein, Ehlers notes.

Girls have two X chromosomes, and one of these two is inactivated in each cell of the body. If the MeCP2 mutation is located on the inactivated chromosome, it will not affect that cell, he says. “So you have to layer that on top of what’s going on.”

Hensch’s team is testing visual acuity in girls with Rett syndrome, with the hypothesis that it will turn out to be poor. Those data are not ready to be discussed, he says, but “everything is looking very good.”