Vision, motor areas of the brain out of sync in autism 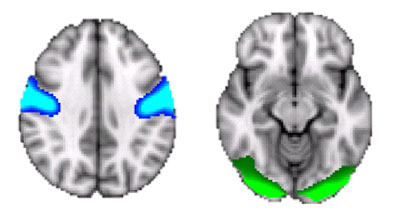 See and do: Strong connections between the visual (green) and motor (blue) parts of the brain may help children imitate others.

Parts of the brain that process vision and control movements are poorly connected in children with autism, according to results presented Saturday at the 2013 Society for Neuroscience annual meeting in San Diego.

In addition to the social deficits that are a core feature of autism, children with the disorder often have clumsy movements. Studies have also found that people with autism have trouble imitating others. The new study uncovers patterns of brain activity suggesting all three of these deficits may be related.

The researchers used functional magnetic resonance imaging (fMRI) to measure resting-state activation — brain activity that occurs while individuals are resting quietly in the scanner — in 45 children with autism and 45 controls. Parts of the brain that tend to activate and deactivate together during this procedure are said to be functionally connected.

The researchers zeroed in on two sets of brain structures involved in motor activity. One of them, the ventral motor component, includes parts of the cortex, the thalamus and lobule 6 of the cerebellum.

They also focused on three areas of the brain involved in visual processing. The most interesting is a region at the back of the brain responsible for complex interpretation of visual information.

Among children with autism, activity in these motor and visual regions is out of sync, the researchers found. That is, when the ventral motor component is active, the visual processing area tends to be inactive, and vice versa.

What’s more, the weaker the connectivity between these two regions, the more severe the child’s autism symptoms are.

The researchers also tested the participants’ ability to imitate sequences of movements — such as patting the right forearm alternately with the palm or back of the left hand — as well as their facility with everyday activities such as combing hair.

Among controls, individuals who have better connectivity between the visual and motor regions are also better at imitating and at everyday movements.

“What’s interesting is we find there is a robust association, but only in the typically developing children,” says lead investigator Stewart Mostofsky, director of neurocognitive and imaging research at the Kennedy Krieger Institute in Baltimore. “We’re not seeing it in the children with autism.”

Mostofsky says this suggests that some children with autism make use of alternative brain pathways to imitate and learn new movements.

At 90 children in total, the study’s size is in its favor. “That’s a hell of a sample size,” says David Beversdorf, associate professor of radiology, neurology and psychology at the University of Missouri, Columbia, who was not involved in the work. Imaging studies often have much smaller numbers, ranging in the teens or lower.

Still, the researchers are scanning additional participants, aiming to understand why only some children with autism have trouble imitating others.

“There seems to be a subset of kids with autism in the normal range [of imitation],” says Mary Beth Nebel, a postdoctoral researcher in Mostofsky’s lab who presented the work. “We want to assess these subgroups separately.”

This sort of analysis may enable the researchers to find the alternative pathways that children with autism use when they mimic others. In turn, that might suggest treatment approaches to help the children improve motor coordination and social skills, Mostofsky says.