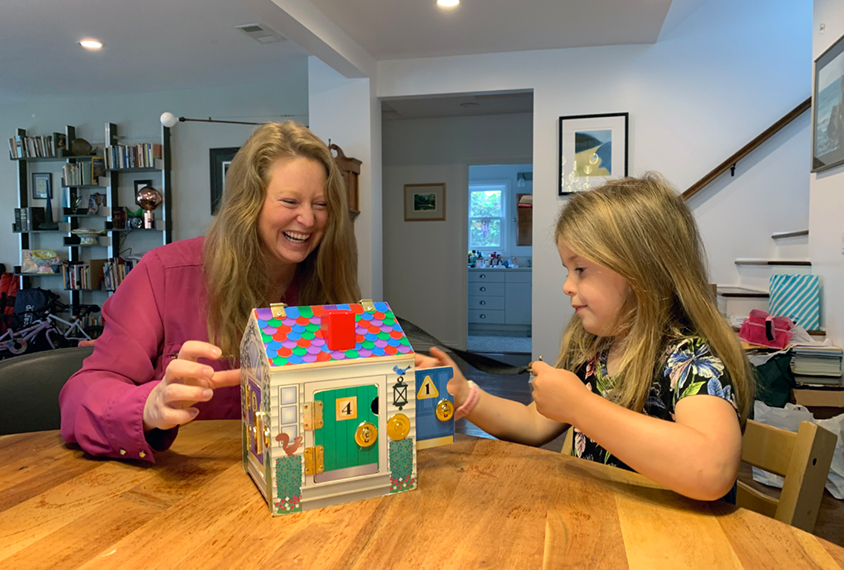 Virtual visit: A new assessment called the Brief Observation of Symptoms of Autism can be conducted at home, as a clinician watches remotely.

Shortly after the coronavirus pandemic began, clinical psychologist Janice Keener was floored when she reassessed a boy she had evaluated for autism in her clinic a few months earlier.

During that initial visit, Keener hadn’t observed any of the repetitive behaviors the boy’s mother had described to her, and Keener couldn’t confirm if he had autism. But when Keener started assessing children remotely because of the pandemic, the mother asked her to evaluate her son again — this time from home.

“Completely different presentation,” says Keener, assistant professor of clinical pediatrics at Children’s Hospital of the King’s Daughters in Norfolk, Virginia, who then diagnosed the child with autism. “That was a really neat opportunity to see into a window of the child’s world.”

Over the past year, experiences like Keener’s have become commonplace as the coronavirus pandemic has forced researchers and clinicians to find alternative ways to assess children for autism. Hundreds have banded together in a new group, called the International Collaborative for Diagnostic Evaluation of Autism (IDEA), that meets over Zoom to compare notes. And many in that group and beyond say virtual assessments have proved more successful than they anticipated — and will almost certainly endure after the pandemic ends.

“We’ve realized we can do this, and we want it to be an option for people who face barriers to coming to our clinic,” says Amy Esler, associate professor of pediatrics at the University of Minnesota in Minneapolis.

Virtual autism assessments are not without drawbacks, Esler and others note. At-home evaluations often come with more distractions, and many families don’t have the tools at home to conduct them. For some people seeking a diagnosis, especially young children and those with severe traits, interactions over a screen can be difficult, sometimes prohibitively so.

But there are also potential benefits over in-person visits: Virtual assessments can reach more people in more geographical areas, improve equity in autism diagnosis, reduce paperwork for families and give clinicians a more accurate view of a child’s day-to-day life, researchers say.

“There are things that the pandemic forced that we wanted to happen a long time ago,” says Stephen Kanne, director of the Center for Autism and the Developing Brain at Weill Cornell Medicine in New York City and one of IDEA’s founders.

Researchers and clinicians use a variety of assessments to diagnose autism, usually involving both interviews and behavioral observations. One of the ‘gold-standard’ tools — the Autism Diagnostic Observation Schedule (ADOS) — also calls for a specialist to interact directly with a child.

Shortly after the pandemic started, Catherine Lord, distinguished professor of psychiatry and education at the University of California, Los Angeles and co-creator of the ADOS, determined that a valid ADOS assessment could not be conducted over a video call or in clinics with people wearing masks or other personal protective equipment.

“People are really decked out, to try to be safe,” Lord says. “So there’s all sorts of sources of distraction, and it’s really not fair to say that a child doesn’t look me in the eye” — ordinarily one of the cardinal signs of autism that clinicians look for during an assessment.

In conversation with Catherine Lord: Hear the co-creator of the Autism Diagnostic Observation Schedule discuss her new tool, the Brief Observation of Symptoms of Autism, and how the pandemic has altered autism diagnosis, maybe permanently. You can read the full transcript here.

But without the ADOS, many clinicians lost their primary method for making a diagnosis. Without those diagnoses, many autistic children lost access to behavioral therapies and other necessary services. And researchers could not do behavioral assessments in person to make or confirm a diagnosis or measure levels of autism traits.

Clinical trials, for example, often use the ADOS to evaluate autism traits before and after an intervention. With that tool off the table, many trials have been slower to restart than they would have been otherwise, says Grace Gengoux, clinical professor of psychiatry at Stanford University in California.

“We only trust the science as much as we trust the measures we’re using,” Gengoux says.

Many research grants also stipulate use of the ADOS or of an ADOS score that is less than a year old. Studies with such grants, as a result, have had to be reconceived or put on hold indefinitely as the pandemic drags on.

“Every study is going to have to have an asterisk by it if it was done during this time,” Kanne says.

Esler had to shift her study on obesity in autistic people. She had originally planned to correlate health data — which she had intended to collect in person — with ADOS scores. Because she is now using virtual assessments and wearable technology, she won’t be able to connect health data with autism trait severity, as she intended. Her research clinic is also losing ADOS scores that would have been routinely entered into a database for future analysis.

“We’re going to have I don’t know how many years’ worth of data with no ADOS,” Esler says. “It’s really hard to think about.”

Those researchers and others have cobbled together new diagnostic processes that borrow elements from the ADOS and other tools: caregiver interviews such as the Vineland Adaptive Behavior Scale and the Autism Diagnostic Interview, Revised, which are well suited for remote use; a video-based screener called TELE-ASD-PEDS, originally designed for rural families and often referred to as the TAP; and a kind of temporary ADOS stand-in developed by Lord herself, called the Brief Observation of Symptoms of Autism (BOSA).

Whether this approach is as accurate as in-person assessments remains to be seen — researchers are still gathering and analyzing those data. But anecdotally, at least, the reviews are favorable. In an unpublished survey of 202 providers using the TAP, for example, the tool’s creators found that only 6 percent used telemedicine to diagnose autism before the pandemic, but 85 percent expected to do so after its end. Clinicians also reported a high degree of confidence in most of their remote diagnoses.

“I think it’s amazing,” says Cheryl Klaiman, associate professor of pediatrics at Emory University in Atlanta, Georgia. “You feel like you can’t do it and it’s going to be so off before you start doing them, and then you do them.”

Some autistic people may prefer remote options, too. Of 117 surveyed adults who were referred for a diagnostic evaluation of autism or attention deficit hyperactivity disorder in 2020, only 48 percent said they would have preferred an in-person meeting, and 60 percent said remote assessments should be available after the pandemic ends.

In Esler’s clinic, the switch to more remote assessments has also helped alleviate the clinic’s long waitlist: They are evaluating young children within six to nine months, rather than a year or longer. She also received a grant in December to create and send families kits with puzzles, toys, books and games to help clinicians assess young children’s cognitive skills and autism traits, and to lend out tablets to help families without that technology participate in video calls.

Making the virtual appointments accessible for all families felt particularly urgent to Esler after George Floyd was killed just a few miles from her lab in Minneapolis.

“It feels really great when you know the family has everything they need,” Esler says. “We really doubled down on our diversity, equity and inclusion efforts this year, and so we really wanted to make sure that every family had a good opportunity for us to see what we needed to see, and that things like toys and resources weren’t getting in the way.” 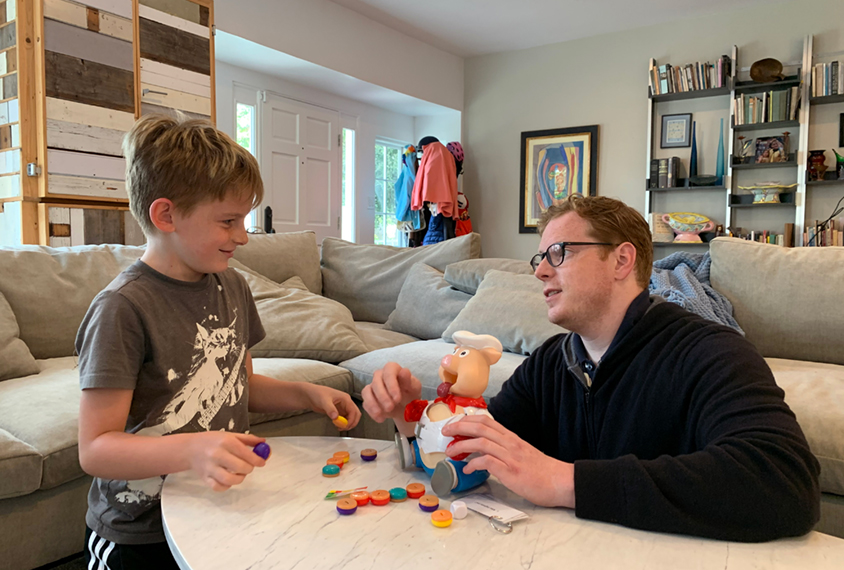 In the short-term, as people start to feel safer coming into labs and clinics but restrictions such as masks and distancing remain, researchers will need to balance what’s possible with what’s most effective, Gengoux says.

In the United States, most insurance companies are covering telehealth visits only as an emergency measure during the pandemic. They could rescind that option once conditions improve, a prospect some clinicians say they are unhappy about.

“I really hope that insurance companies continue to reimburse telehealth,” Keener says. “The option to do telehealth evaluations for families is huge.”

And many state licensing laws don’t allow appointments when the provider and patient are located in different states, a potential barrier for researchers conducting and studying telehealth assessments in the future.

“This pandemic has made everybody question whether that really makes a lot of sense,” Gengoux says.

Improving remote assessments could help build the case for insurance coverage. Researchers need continued funding to provide families with resources like Esler’s at-home kits and for studies that collect and analyze data on the validity of remote assessments, they say. And they’re also working to understand if there are certain characteristics that make some people better suited for remote assessments than others.

That information could also highlight what virtual elements deserve to be maintained, even when in-person assessments can fully resume.

“Many of us found out, ‘No it’s okay, we can do this, and it’s still good patient care,’” Kanne says. “It changed the way we thought about how to do assessments.”