Variants of autism-linked gene have diverse effects in mice 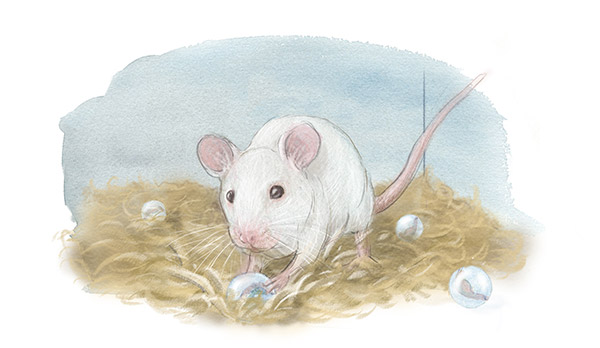 Alexis Demetriades Back away: Instead of burying marbles as other mice do, mice with a SHANK3 mutation avoid them completely.

Four different mutations in SHANK3, a leading autism candidate gene, each lead to a different set of symptoms in mice, researchers have found. They presented their unpublished results on Thursday at a satellite symposium of the 2014 Society for Neuroscience annual meeting in Washington, D.C.

SHANK3 sits at the receiving ends of synapses, the points of contact between neurons. Deletions of the gene lead to Phelan-McDermid syndrome, which is characterized by intellectual disability, motor and developmental delay and, often, autism.

Studies suggest that as much as 2 percent of people who have autism and intellectual disability carry mutations that disrupt SHANK3. There are at least five mouse models with SHANK3 mutations1.

Each of the models has a version of SHANK3 missing a different part of the gene. In a poster session on Thursday, Mehreen Kouser, a graduate student in Craig Powell’s laboratory at the University of Texas Southwestern in Dallas, presented the first set of mice with the same SHANK3 mutation seen in an individual with autism2. The mutation inserts a single nucleotide into the gene, disrupting the production of the full-length protein.

These mice show nearly identical symptoms to another mouse model lacking the same section of the gene. They have an array of behavioral problems, including a lack of coordination, problems with learning and anxiety, which are reminiscent of symptoms seen in people with Phelan-McDermid syndrome. As in other autism mouse models, the synapses of these mice also show impairments in their ability to adapt to experience and a decrease in their propensity to fire.

Surprisingly, however, the mice steer well clear of marbles placed in their cage rather than burying them obsessively as some other autism models do, says Powell. This is “fascinating” and suggests they have an aversion to novelty, he says.

What also makes the model unique is that researchers can restore SHANK3 later in the mice’s lives and see whether that alleviates these symptoms. Powell and his team plan to use this to home in on the ‘critical period’ for SHANK3’s role in development.

“This is the coolest experiment,” says Kouser. “If it works, the implications are amazing: It means that autism in the case of SHANK3 mutation is not a developmental disorder; it’s just a symptom of SHANK3 deletion.”

In another poster, Christine Ochoa, another graduate student in Powell’s lab, compared the effects of this mutation with those from three other SHANK3 mouse models. Each has overlapping behavioral and synaptic problems, but no one feature is shared by all four.

Looking at the content of synapses purified from adult mice, the researchers found one consistent change in the striatum, a brain region that coordinates movement. In each of the mouse models, synapses in the striatum contain low levels of the long version of a protein called HOMER1.

HOMER1 tethers SHANK3 to a set of proteins called mGluR at the interior edges of synapses. HOMER1 and mGluR are both linked to fragile X syndrome, an autism-related disorder, and the latter is a target of fragile X drug treatments. These treatments might also help people with SHANK3 mutations, Ochoa says.