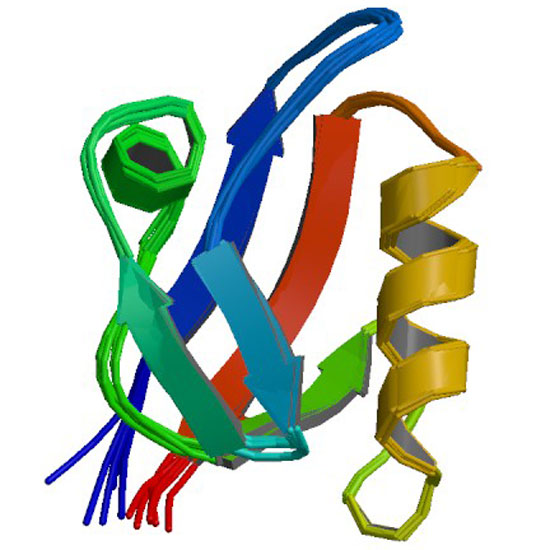 Variable risk: At the synapse, APBA2 interacts with neurexin 1, also linked to autism, making it a particularly good candidate for understanding autism.

Scientists have identified several autism-specific variants in a gene that lies within a chromosomal region linked to the disorder, according to a poster presented at the World Congress of Psychiatric Genetics in San Diego.

Interestingly, a closer look at one family tree suggests that some of these variants may be harmless when carried alone but, when inherited together, may lead to autism. The results are in press at the journal Autism Research.

Last year, Susan Christian and colleagues at the University of Chicago found a large, inherited DNA duplication in chromosomal region 15q13.1 shared by two brothers with autism1. The region — which has also been linked to schizophrenia, mental retardation and epilepsy — includes a gene called APBA2 that encodes a protein at the synapse, the nexus of neuronal communication.

Because the APBA2 and NRXN1 proteins interact at the synapse, these variants are particularly good candidates for understanding what causes autism, says Ravinesh Kumar, Christian’s collaborator and a postdoctoral fellow in William Dobyns‘ lab at the University of Chicago.

Several studies have linked NRXN1 and closely related genes to autism, prompting the researchers to investigate whether APBA2 mutations also crop up in people with the disorder. Mouse studies have shown that animals lacking the gene display abnormal social behaviors3.

“It might be that having the duplication, too much of the gene, might contribute to autism in some regard. But a mutation that disrupts the function of a gene might have a completely different effect,” Kumar says. “It’s really tricky to try to interpret.”

Kumar sequenced the protein-coding regions of APBA2 in people with autism and in healthy controls. He drew the autism samples from the Autism Genetic Resource Exchange, a large gene bank of children with autism and their families.

Analyzing 512 blood samples from people with autism and 463 healthy controls, Kumar found seven novel rare APBA2 variants that are unique to the autism group, and four APBA2 variants specific to the control group. The difference is not great enough to say with statistical confidence that the variants are more common in autism.

One family in the autism group has a particularly interesting family tree, however. Two brothers, both diagnosed with autism, each carry the same two APBA2 variants. Their mother carries one of the variants, and their father the other, but neither parent has autism.

“Our hypothesis is that one event is not sufficient to give rise to autism, but having both is sufficient,” Kumar says. “But at this point, it’s still speculative.”

Taken together with older studies, the results suggest that APBA2 is a good candidate gene for autism, he says, and deserves further study.