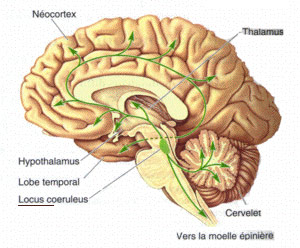 Fight or flight: Drugs that act on cells in the locus coeruleus, a part of the brain stem, may treat some autism symptoms.

Fight or flight: Drugs that act on cells in the locus coeruleus, a part of the brain stem, may treat some autism symptoms.

Drugs that act on the adrenaline system can alleviate autism-like symptoms in a rat model of the disorder, according to unpublished research presented in a poster Sunday at the 2011 Society for Neuroscience annual meeting in Washington, D.C.

The researchers studied rats whose mothers had been exposed to valproic acid (VPA) during pregnancy. Prenatal exposure to VPA, a common epilepsy drug, is a well-known autism risk factor in people, and causes social deficits, repetitive behaviors and anxiety in rats1.

In the new work, the researchers found a drug that can alleviate anxiety in the rats, and another that improves social behaviors. Both drugs act on adrenergic receptors, which rely on the chemical messengers adrenaline and noradrenaline to control ‘flight or fight’ responses of the sympathetic nervous system.

The work suggests that this class of drugs may have promise for treating some children with autism, but “won’t target all of the symptoms that autism shows,” says Swagata Roychowdhury, a graduate student in Marco Atzori‘s laboratory at the University of Texas at Dallas.

The hub of the adrenaline system is the locus coeruleus, a part of the brain stem that’s involved in stress responses. Mice missing MeCP2, which model the autism-related Rett syndrome, have abnormally small and excitable neurons in this region2. Some researchers have proposed that cells in the locus coeruleus could help explain the mysterious link between fever and autism.

In the new study, the researchers found that injecting yohimbine into the body cavity of VPA rats improves their social behaviors on an open-field test, compared with VPA rats injected with a salt solution. Yohimbine, which blocks the alpha-2 adrenergic receptor, is approved in the United States for treating erectile dysfunction.

By contrast, treatment with clonidine, which stimulates the same receptor, lowers the VPA rats’ social interactions compared with saline-injected controls. “There was a huge decrease,” Roychowdhury says.

Giving the rats nortriptyline, an antidepressant that blocks noradrenaline, significantly alleviates anxiety in the VPA rats, as assessed by an elevated plus maze, compared with controls, the researchers found.

None of the three drugs treat the animals’ repetitive behaviors, the study found.

Much more research is needed on the drugs’ effects before moving to clinical testing, the researchers say. “We don’t know yet how VPA is affecting the [adrenergic] system,” Roychowdhury says.

There may also be dosing issues. In the new study, yohimbine improved social behaviors at a dose of 1.0 milligram per kilogram of body weight, but not at half of that dose. And the nortriptyline effect on anxiety required two weeks of chronic treatment.