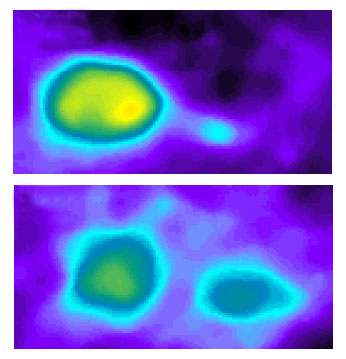 Sensory signals: When a sound and a touch are presented simultaneously, the brain of a mouse model of autism (bottom) responds differently than the brains of controls (top).

Sensory signals: When a sound and a touch are presented simultaneously, the brain of a mouse model of autism (bottom) responds differently than the brains of controls (top).

The anxiety drug diazepam, commonly marketed as Valium, reverses deficits in sensory integration in a mouse model of autism, according to research presented Sunday at the 2012 Society for Neuroscience annual meeting in New Orleans.

Specifically, the drug allows the mice to integrate responses to sound and touch, but it works only when given a few weeks after birth.

The findings may have implications beyond the integration of sound and touch, says lead investigator Takao Hensch, professor of neurology at Harvard University. “I think it will generalize into something important about how the autistic brain integrates internal and external information.”

Children with autism often have problems integrating sensory information, such as the sight of a glass breaking and the accompanying smashing sound1,2. But little research has been done on the underlying molecular mechanisms.

Nadine Gogolla, a postdoctoral fellow in Hensch’s lab, analyzed sensory integration in BTBR mice — an inbred strain of mice that show some of the social deficits and repetitive behaviors seen in autism — and in a control strain with normal social behavior.

The researchers focused specifically on the insular cortex, a brain region known to play a role in sensory integration as well as in a host of other functions, and which has been shown to function abnormally in autism3.

Gogolla identified a region in the insular cortex of the control mice that responds more strongly when the animal both hears a sound and feels a touch than when either sensation is presented alone. In BTBR mice, however, this region responds to the combined audio-tactile cues as if each stimulus were presented individually.

“That means they can’t extract additional information,” says Gogolla. The researchers don’t yet know whether other animal models of autism show similar defects.

In control mice, cells in the insula become more specialized as the animal ages, responding preferentially to a specific tone. “Over time, they develop more of a piano organization,” says Gogolla.

The BTBR mice don’t show this type of auditory maturation. (The researchers did not see similar differences in the response to touch, but Gogolla says this may be because they did not look at the right time during development.)

Hensch’s lab has previously shown that inhibitory circuits, which quiet neural activity, are essential for this type of maturation.

In the new study, they found that BTBR mice have lower levels than controls do of a number of inhibitory molecules such as GAD65, which helps to synthesize the inhibitory chemical messenger gamma-aminobutyric acid, or GABA.

Like the BTBR mice, those missing GAD65 lack audio-tactile integration, says Gogolla. The finding suggests that weak inhibitory signaling is what throws maturation off course, she says.

Treating mice with diazepam early on, when the mice are 15 to 28 days old, restores normal integration of sound and touch. The effect is permanent, lasting long after the drug is gone from the system, and the drug also restores levels of inhibitory markers. (It’s not clear what the most effective age for treatment might be in people.) It also alleviates the excessive grooming that is characteristic of BTBR mice.

Treating adult mice, however, has no effect.

The researchers next plan to look at whether the treatment improves other behavior, such as social interactions. To determine whether the insula is essential for the drug’s benefit, they plan to target the drug to only that region and see whether it has the same effect.

They also aim to explore how the excitatory-inhibitory balance helps the sound-sensitive cells in the insula mature. Hensch has done extensive research into the phenomenon in the visual system4.

The insula also plays a role in integrating information from internal organs, such as the gut. “People with autism have lots of gut problems, so maybe they are getting physical discomfort and stress signals from internal organs,” he says. “That probably colors the way they perceive the world.”