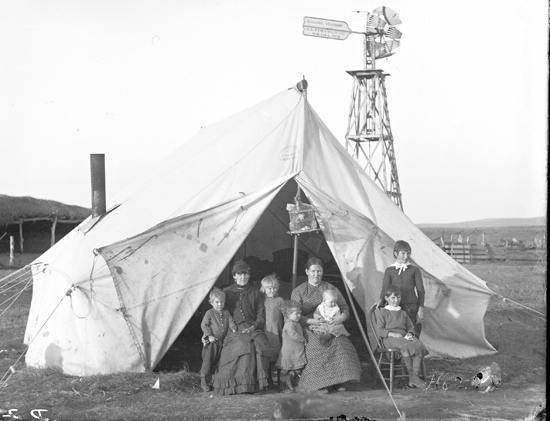 Nebraska State Historical Society Genetic jackpot: Settled by large families that stay in the state, Utah is a cauldron of common ancestry.

Chromosome 15 may harbor one or more risk genes for autism, according to a new study of multigenerational inheritance in Utah, published last month in Molecular Psychiatry1.

Over more than 20 years, researchers have recruited dozens of Utah families with a history of autism, and tracked family pedigrees stretching back as far as nine generations.

Most familial autism studies focus on siblings or parents of children with autism. Because members of an extended family are more likely to carry the same rare genetic variants, however, a study of multiple generations is an invaluable resource for genetic studies.

In this case, researchers analyzed genetic sequences of 653 individuals, including 192 with an autism diagnosis. The participants are from 20 families, each spanning six to nine generations, and 44 smaller families with two or three generations. Intriguingly, the project turned up families with autism who were unaware of their shared ancestry.

“The most important aspect of this paper is that they have these 20 large pedigrees that individually have up to five affected individuals,” says Andrew Paterson, associate professor of biostatistics at the University of Toronto’s Dalla Lana School of Public Health. Paterson was not involved in the study.

The state of Utah is fertile ground for geneticists2. Settled largely by polygamous Mormons who tended to have large families and stay in the state, the population is a cauldron of common ancestry.

The researchers identified families from the Utah Population Database, a computerized genealogy database that contains family history for more than 6.5 million people, many of them descendants of 19th century pioneers.

That provides a rare opportunity to carry out genome-wide pedigree studies. “The only other place where this has been done to some extent is Iceland, but that population is much smaller, only a few hundred thousand compared to Utah,” says Paterson3.

The high data peaks in both the total collection of pedigrees and individual family pedigrees “is in excess of any previous pedigree linkage study in autism,” says Paterson. “That makes it very likely that this is a true signal and that there are genes in this region — actually, multiple genes — associated with autism in the Utah population.”

In a linkage analysis, researchers track inheritance patterns by looking for chromosomal regions at which rare genetic variations occur more often than would happen by chance. The probability is expressed in a logarithm of odds (LOD) score.

The Utah study calculated LOD scores ranging from 3.59 to 5.31 on three regions of chromosome 15q. An LOD of greater than 3.0 is considered convincing evidence of linkage.

“We really do think that these peaks on chromosome 15 are important,” says lead investigator Hilary Coon, professor of psychiatry at the University of Utah.

The study also turned up “less statistically compelling” peaks on chromosomes 2, 7 and 13, all of which overlap with findings from other studies, Coon notes. For example, the region on chromosome 7q overlaps with MET, a gene linked to autism.

Interestingly, the researchers found that genetic variants differ within, as well as among, families. “We thought we’d see homogeneity within a family based on clinical profile,” says Coon. “But as we’ve discovered, phenotype is different even between sibling pairs.”

In a 2008 analysis of one six-generation family with seven cases of autism, her team identified three regions of interest, two of them on chromosome 3q and one on 20q. All of these regions were already implicated in autism4.

As in the new study, however, members of the same family carry different genetic variants in these regions.

One drawback to linkage studies is that the chromosomal regions identified are typically large and home to many genes. “These broad regions [of chromosomes] must be narrowed to find the risk variants,” says Bernie Devlin, professor of human genetics at the University of Pittsburgh.

Happily, next-generation sequencing techniques have made that task easier. Researchers who once had to laboriously sequence genes one at a time, searching for particular DNA variations, can now scan multiple genes at the same time.

The volume of data being generated by linkage and association studies in autism presents an almost overwhelming challenge.

“We’re almost drowning in data,” Coon says. “At some point we’ll figure out how these different hits are interrelated and what pathways are involved. We’re still not there.”