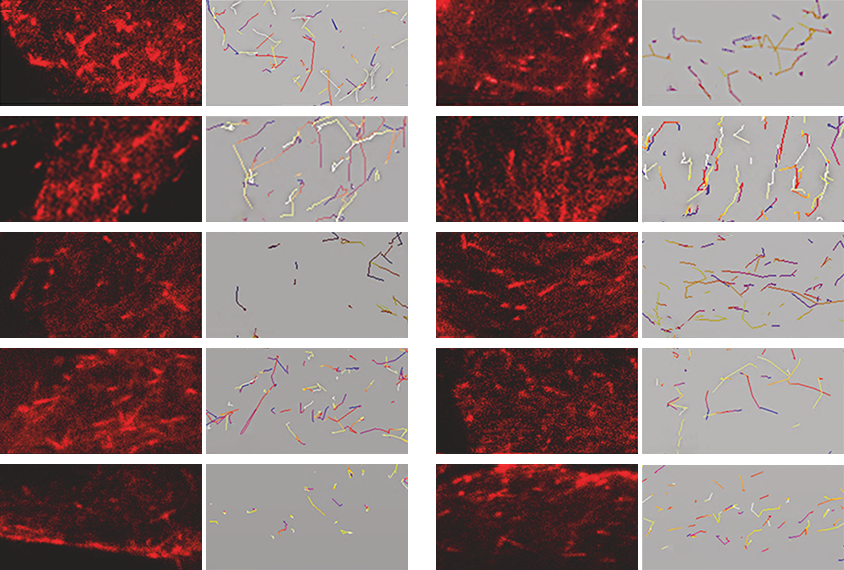 Wire frame: Cells that express some mutated versions of the gene ADNP (bottom three rows) have shorter growing ends on microtubules (red, left), a component of a cell’s skeleton, than cells with an extra copy of the gene or typical levels of gene expression (top two rows), but treatment with a fragment of the ADNP protein reduces these differences (right).

Two genes linked to autism interact to regulate the cytoskeleton, the cell’s internal scaffolding, hinting at a common mechanism that may underlie multiple forms of the condition, according to a new study. Alterations in ADNP cause a syndrome that includes autism and intellectual disability, whereas mutations in SHANK3 account for an estimated 1 to 2 percent of autism cases.

Both genes encode proteins involved in the function of synapses: The ADNP protein attaches to other proteins that regulate microtubules — self-assembling components of the cytoskeleton — and that help to form a cell’s signal-receiving dendritic spines. The SHANK3 protein joins up with actin protein, another component of the cytoskeleton, at the tips of dendritic spines.

“They are kind of neighbors in terms of their interaction in the dendritic spine,” says Illana Gozes, professor emerita of clinical biochemistry at Tel Aviv University in Israel, who led the new study.

Until now, scientists had not shown that ADNP and SHANK3 proteins might actually connect with each other. But Gozes and her colleagues identified a sequence in ADNP protein that binds to part of SHANK3 protein. The same binding site exists in an eight-amino-acid snippet of ADNP, called NAP, that has shown promise in treating traits tied to ADNP syndrome in a mouse model and had mixed results in clinical trials for several brain conditions.

In the new study, the team found that NAP also eases autism-like behaviors in mice with SHANK3 mutations, suggesting that it might help treat people missing a functional copy of the gene, Gozes says.

Such research may help scientists develop drugs that are effective in treating different conditions related to various genetic alterations, says Haitham Amal, assistant professor of neuromics, cell signaling and translational medicine at the Hebrew University of Jerusalem in Israel, who was not involved in the study. “We are talking about two genes that are associated not only with autism but also with schizophrenia and Alzheimer’s.”

Gozes and her colleagues assessed the molecular effects of three different mutations found in cells from people with ADNP syndrome by using plasmids, or DNA loops. They introduced different plasmids — loops with no copy of ADNP, a functional copy or one of the three mutations — into cells derived from a mouse neuroblastoma, a type of nerve cell cancer, causing the cells to express an extra copy of ADNP or a mutated version of it.

Two of the mutations — p.Ser404* and p.Glu830synfs*83 — stunted growth of the cells’ microtubules and slowed their assembly, fluorescence imaging revealed. Cells that expressed these two mutations also showed less binding between microtubules and tau, a protein involved in Alzheimer’s disease and ADNP syndrome.

To the researchers’ surprise, one of the mutations — p.Lys408Valsf*31 — did not affect microtubules or tau. But the mutated protein’s sequence contained a new binding site, called SH3, that is found in many other proteins and mediates their interactions, including those that regulate the cytoskeleton. Hampering SH3’s function in cells with the mutated gene resulted in molecular effects similar to those seen in cells with the two other ADNP mutations, suggesting that the site plays an important role in ADNP’s function.

The findings were published in May in Molecular Psychiatry.

Actin bound more readily with both SHANK3 and ADNP in protein extracts from the brains of mice with a SHANK3 mutation, compared with extracts from controls. Treatment with NAP normalized these levels, the researchers found.

NAP treatment also increased the amount of time mice with a SHANK3 mutation spent in the center of a cage, an indicator of dampened anxiety. The mice also groomed less and preferred to spend time with another mouse over an object, signifying improvements in traits considered to be analogs of the repetitive behaviors and social difficulties seen in people with autism.

The idea that ADNP and SHANK3 might be linked is intriguing, and identifying a common pathway underlying autism “would really be a big leap forward,” says Frank Kooy, professor of cognitive genetics at the University of Antwerp in Belgium. Kooy supplied cells from people with ADNP syndrome for the study and has collaborated previously with Gozes but was not involved in the new research.

The extent to which the shared mechanism between the genes explains the effects of ADNP mutations has yet to be determined, however. ADNP is also involved in remodeling chromatin, the coiled complex that packs DNA into cells, and that process has a multitude of downstream effects, Kooy says. Also, although the molecular connection between ADNP and SHANK3 appears likely, the findings need to be confirmed, he says.

ADNP’s interactions with other proteins still needs to be examined too, according to Gozes. Nonetheless, she says, the findings help elucidate what NAP does in cells, which is important for drug development. She and her colleagues are working to bring NAP into clinical trials for ADNP syndrome.