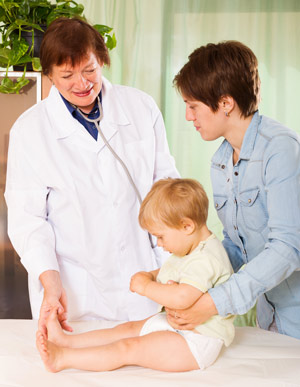 Iakov Filimonov/Shutterstock.com Subtle signs: Parents and physicians may miss early indicators of autism in infants, such as failing to point to interesting objects.

Short questionnaires that parents can fill out at a pediatrician’s office flag early signs of autism in infants and toddlers well before the disorder is usually diagnosed, according to two new studies.

One team, led by Karen Pierce at the University of California, San Diego, screened more than 10,000 children for speech and language delays using a 24-item questionnaire, the Infant-Toddler Checklist.

Of 184 infants who failed the screen at a well-baby checkup at age 1, 32 were diagnosed with autism by their 3rd birthday, and another 61 with speech or developmental delays, according to an article that appeared online last week in Pediatrics1.

A second study published online 11 April in The Journal of Pediatrics screened 990 children at 18 to 20 months of age. That study used both the Infant-Toddler Checklist and the 23-item Modified Autism Checklist and identified 13 children with early signs of autism and 16 with speech or other delays2.

Both questionnaires are already in use for screening purposes, but neither has been administered systematically in a clinical setting.

Unlike the Autism Diagnostic Observation Schedule, which must be administered by a trained examiner and takes up to an hour, these rapid checklists can’t diagnose autism. Both instruments have high false-positive rates and pick up other types of delays.

But the two new studies show that the checklists can successfully flag infants who are at risk long before age 3, the average age at which most children with autism are diagnosed.

“A formal screening opportunity can identify more children than relying on concerns expressed by parents or physicians alone,” says lead investigator Judith Miller, senior scientist at the Center for Autism Research at Children’s Hospital in Philadelphia. “Reading the screening questionnaires and filling them out educated parents about early signs and made them rethink what they were seeing at home.”

Although the American Academy of Pediatrics recommends that all children be screened for autism at 18 and 24 months of age, fewer than half of pediatric practices surveyed in the first study were following that guideline.

Curiously, nearly 75 percent of parents whose children screened positive on both checklists did not bring them in for follow-up evaluations.

That may be the result of a lack of awareness of the disorder on their part, says Miller. “There were parents who when we said, ‘Your child has early signs of autism’ replied, ‘What’s that?'”

The subtlety of the symptoms, combined with the very young age of the children, is also probably a factor, says Deborah Fein, professor of psychology at the University of Connecticut.

Fein, who was not involved with either study, co-developed the Modified Autism Checklist, and has carried out her own assessments of early screening tests. “The younger you go, the more parental resistance there will be,” Fein says, “because the deviation from the normal trajectory of development is less clear [then].”

Studies of the infant siblings of children with autism — who are at a much higher risk of developing the disorder — have shown that signs of the disorder may be evident as early as 6 months of age.

Scientists are studying these ‘baby sibs’ intensively in order to identify biomarkers that can be used for autism screening.

The two new studies take a different approach by collaborating with community pediatricians who are the first-line providers of health care for infants.

When she first proposed her study, Miller says, she met with skepticism from researchers who believed that pediatricians would not be willing to take the time to score and analyze the results of the checklist.

To circumvent that issue, she adopted what she terms a ‘blood sample’ approach, in which the pediatrician collects the data and sends it to her lab for analysis. Her team worked with a single provider, a large community-based pediatric practice in Salt Lake City, Utah, but she says the model could be scaled up for wider use.

“Doctors in rural areas, for example, could collect the screening information and send it to an autism clinic to interpret the results,” she says.

Pierce’s study was structured a bit differently. As in Miller’s study, doctors distributed the Infant-Toddler Checklist and study materials to parents in the waiting room. The doctors then scored the tests themselves, delivering the results to parents, and recommending further evaluation for children who failed the screen.

The institutional review board at the University of California, San Diego, did not allow Pierce to contact the families directly. “Our hands were tied,” says Pierce, assistant adjunct professor in neurosciences. “We had to wait for the families to call us.”

Even though most parents whose children failed the screens did not appear in her clinic for further evaluation — perhaps because they sought evaluation elsewhere — she says she was impressed by the doctors’ response.

“I never had a pediatrician say they were too busy; I met zero resistance,” she says. That may be because the doctors who did the scoring could bill insurance companies for their time.

The cost-benefit equation is a legitimate concern for physicians, says Fein. “Screening has to be reimbursed or doctors won’t do it,” she says.

Miller plans to present follow-up results at the IMFAR conference in San Diego later this month.

Pierce is also carrying out follow-up studies on the children in her sample. In the meantime, she is pleased that she has already helped transform the standard of pediatric care in San Diego.

“I’m now up to 170 pediatricians in San Diego and we’ve screened over 18,000 babies,” Pierce says. “Doctors call me now — they hear about the program and they want to be involved.”