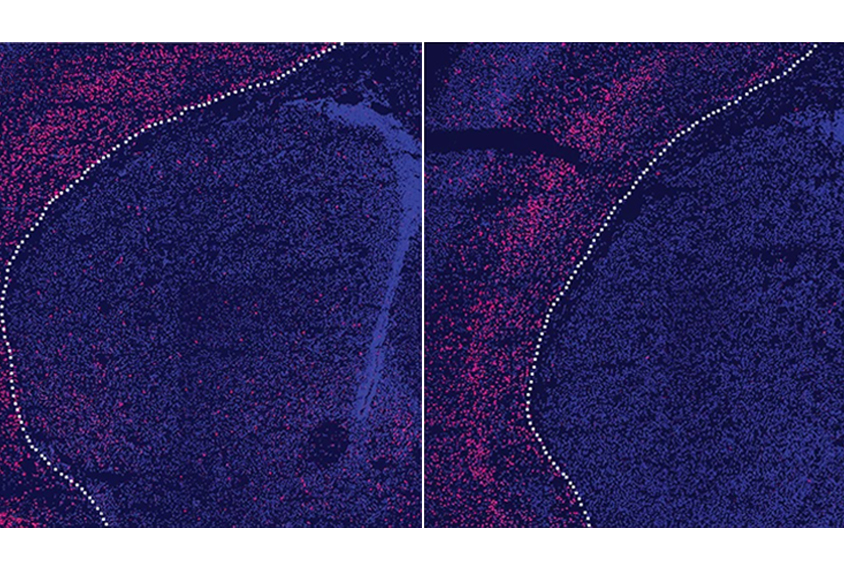 Two separate sets of neurons govern the social difficulties and repetitive behaviors associated with mutations in TSHZ3, a top autism candidate gene, according to a new mouse study.

The results could help advance a circuit-level understanding of autism, says co-lead investigator Laurent Fasano, senior researcher at the French National Center for Scientific Research and Aix-Marseille University in Marseille, France. “Although we know that the results obtained with animal models will not necessarily be transposable to humans, we hope that our results will stimulate additional studies that will benefit autistic people.”

In the new work, Fasano and his colleagues homed in on cortical projection neurons, which connect the cerebral cortex to other brain regions, and striatal cholinergic interneurons, which produce the chemical messenger acetylcholine in the striatum. Together, these cell types form part of the corticostriatal circuit, the dysfunction of which has been implicated in autism.

“Whereas many studies have linked defective development and function of the corticostriatal pathway to autism, there is little evidence for an implication of striatal cholinergic interneurons,” says co-lead investigator Lydia Kerkerian-Le Goff, senior researcher at the French National Center for Scientific Research and Aix-Marseille University.

Picking out specific cell types in the corticostriatal circuit and linking them to distinct autism-related behaviors is important, says Michael Ragozzino, professor of behavioral neuroscience at the University of Illinois Chicago, who was not involved in the study. The study’s results suggest that repetitive behaviors and social deficits, autism’s core traits, have different neurobiological roots, he says. “This may also suggest that different therapeutics may need to be developed to effectively treat both symptom domains.”

More than 20 years’ worth of research has linked the cholinergic system to autism, including studies that suggest Alzheimer’s drugs, which target that system, can ease autism traits, yet it’s led to few clinical trials, says Deborah Sokol, associate professor of clinical neurology at Indiana University in Indianapolis, who was not involved in the new work. “Perhaps such granular analysis of circuitry specific to autistic behavior may result in better focused treatment and ultimately clinical drug trials.”

TSHZ3 encodes a protein that turns other genes off and on during fetal brain development. It is also involved in the development of the urinary tract, and mutations in the gene have been linked to multiple forms of cancer in people.

Mice missing a copy of TSHZ3 show little interest in other mice and have repetitive patterns of behavior, according to a 2016 study by Fasano and Kerkerian-Le Goff. The animals also have abnormal corticostriatal synapses and altered patterns of TSHZ3 expression in the corticostriatal circuit.

In the new study, which appeared in March in Translational Psychiatry, Fasano and Kerkerian-Le Goff’s team deleted both copies of the gene from each set of neurons, one at a time.

In two tests of sociability, mice missing TSHZ3 in their cortical projection neurons behaved differently from wildtype mice — showing no more interest in another mouse than in a pebble, nor in a new mouse when it replaced a familiar one.

These mice also had altered brain structure and activity in part of the corticostriatal pathway, as well as a significant decrease in excitatory NMDA signaling. Dysfunction in the receptors that mediate this signaling has been linked to autism. The loss of TSHZ3 in the cortical projection neurons also severely impaired the animals’ ability to change synaptic strength in response to learning — a process called synaptic plasticity.

Mice missing both copies of TSHZ3 in their striatal cholinergic neurons, on the other hand, behaved almost indistinguishably from wildtype mice on both tests of social behavior. They did, however, exhibit more analogs of repetitive behaviors, such as increased marble burying, dipping their head in and out of holes in a board, digging holes in their bedding and leaning against a wall in an open enclosure.

On the cellular level, the striatal cholinergic interneuron mice had the same number of these brain cells as wildtype mice did. But the cells in question fired less often and with less strength than those in the other model mice or the wildtype mice, activity recordings showed.

Eliminating both copies of TSHZ3 from cortical projection neurons shortly after birth induces repetitive behaviors and social deficits, Fasano and Kerkerian-Le Goff’s team showed in a 2019 study. “Therefore, we plan to test whether and how cell type-specific restoration of TSHZ3 function after birth improves mouse behaviors,” Fasano says.