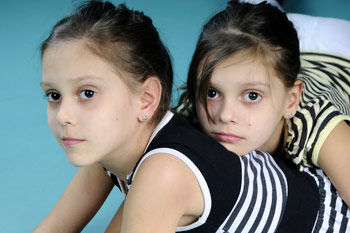 Double take: Girls don’t have autism-like behaviors unless they come from families at high risk for the disorder, according to the new study.

Double take: Girls don’t have autism-like behaviors unless they come from families at high risk for the disorder, according to the new study.

A comparison of autism-like behaviors in nearly 10,000 pairs of fraternal twins suggests that girls are somehow protected from the disorder1.

The findings, published 19 February in the Proceedings of the National Academy of Sciences, may partly explain why autism is four times more common in boys than girls — one of the oldest and most puzzling statistics in the field.

The study measured autism traits — such as conversational abilities, social preferences and repetitive behaviors — in children in the general population. Among children who have many autism symptoms, girls are more likely than boys to have siblings who also have the traits, the study found.

The findings suggest that girls have a baseline level of protection, and don’t display many autism traits unless they’re “loaded up to the gills with risk factors,” says lead investigator Angelica Ronald, senior lecturer in psychological sciences at Birkbeck, University of London.

Risk factors in these families may include inherited genetic variants, shared environmental influences or some combination of both, she says.

The study does not address the larger question of how this protective effect might work. It might be rooted in biological differences between the sexes. Or it might not really be a matter of protection at all, but rather the result of bias in how clinicians diagnose the disorder, the researchers say.

For example, the male-to-female ratio in autism becomes even bigger for children with high intelligence quotients, suggesting that clinicians and parents may not notice less severe autism symptoms in girls, or may be more primed to look for them in boys.

Researchers have long struggled to explain the extreme gender bias in autism. Some have proposed factors, such as high levels of fetal testosterone, that might make boys particularly vulnerable. Others have suggested that girls may be protected through a genetic mechanism related to their second X chromosome2.

Genetic evidence of a possible female protective effect came in 2011, when two studies in Neuron showed that girls with autism are more likely to carry rare, spontaneous copy number variations (CNVs) — DNA deletions and duplications — than are boys with autism. What’s more, the CNVs that girls carry tend to be larger, suggesting that they only get autism when exposed to the most powerful genetic hits3, 4.

“Those original findings could be taken in two ways,” Robinson says. For example, she says, one explanation is a diagnostic bias. “Sure, the girls show more insults, but it’s just because to get diagnosed with autism as a girl, you generally have to be more impaired.”

The other possibility is that there is a bona fide protective effect in girls, she says.

In the new study, she and Ronald investigated whether girls in the general population are protected from autism risk factors that run in families. The study measured autism traits on a continuum, rather than by categorical diagnoses. For example, a child might have some repetitive behaviors without being diagnosed as having autism.

The researchers relied on two large samples of fraternal twins: 3,842 pairs from the Twins Early Development Study in the U.K. and 6,040 pairs from the Child and Adolescent Twin Study in Sweden. Both studies used questionnaires to measure autism traits, such as speech delay or difficulty making conversation, in the twins as children.

The researchers focused on pairs in which one of the twins — dubbed the ‘proband’ — scored in the top five percent of autism trait scores. Siblings of female probands showed significantly more autism symptoms than did siblings of male probands, the study found.

That suggests that girls don’t have autism-like behaviors unless they come from families with high risk, whereas boys can have these traits even in low-risk families.

“This female protective effect idea is something that’s tossed around all the time, but really hasn’t had much strong evidence behind it,” says Lauren Weiss, assistant professor of psychiatry at the University of California, San Francisco. “I think this study provides some very good evidence.”

Researchers would have had to study many more twin pairs to reach the same level of statistical power in a study based on autism diagnoses rather than on traits of the disorder, she adds.

Although the data strongly support the ‘female protective effect’ hypothesis, they don’t completely rule out other explanations, Ronald says.

For example, the questionnaires used to measure autism traits are based on ratings from parents, which are susceptible to cultural biases. What’s more, many instruments used to assess autism and autism-like symptoms were designed and validated largely in groups of boys, who may manifest the symptoms of autism differently than girls do.

The data are also somewhat puzzling in light of older studies on spontaneous risk factors in girls with autism.

The Neuron studies found that girls with autism are more likely than boys to have spontaneous mutations. Because these mutations are not inherited, it would suggest that the girls’ siblings would be less likely to show autism traits — exactly the opposite of the new findings.

“It struck me that on its surface, there seem to be some kind of a contradiction,” says Jeremy Silverman, professor of psychiatry at Mount Sinai School of Medicine in New York, who was not involved in the new work.

However, Robinson says that because spontaneous mutations are rare in the general population, they wouldn’t be expected to play a “meaningful role” in this sample.

Robinson and Ronald are next looking at whether specific genetic risk factors for autism and related disorders are more likely to lead to traits of the disorder in boys than in girls. If the female protective effect hypothesis is correct, then “you should see a greater trait burden in boys who carry these risk factors than girls, on average,” Robinson says.

Everybody agrees that the autism field would benefit from more studies of girls with the disorder, who have historically been ignored.

“Understanding the sex difference is going to help everyone, boys and girls with autism,” Ronald says. “It’s part of the whole mechanism by which autism develops.”